My Relationship With Nature

As my life has evolved, so has my relationship to nature. I’ve been living in different places and I’ve been in different phases of my life, but nature’s always been there in one way or another. I’m Oscar Frick, and my life’s been a journey taking me from the deep forests of southern Sweden, through the big city life before coming out the other side having figured out that among the mountains is where I belong.

I grew up with nature as a natural part of my life. My youth is what has laid the base for my ongoing relationship with it and what started me down the path of becoming an unchangeable outdoor nerd. Exactly how I’ve spent my time with nature has changed as I’ve grown and changed as a person, but it’s always been there in one way or another.

When I was young, I lived in the forest covered parts of southern Sweden. It’s a place with a lot of outdoors, but it’s seriously lacking in terms of verticality. As a kid I didn’t care though, and I spent after school hours playing in the woods. A proper forest that is – big enough to get lost in, not just a small inner-city glade. Add the yearly ski trip to one or another smaller Swedish ski resort, and the odd hiking trip with grandparents during summer on top of that and you’ve got a decent base to start cultivating a life-long partnership with nature.

"I was mostly doing other things, but nature was always there for me, waiting for me when I needed it." 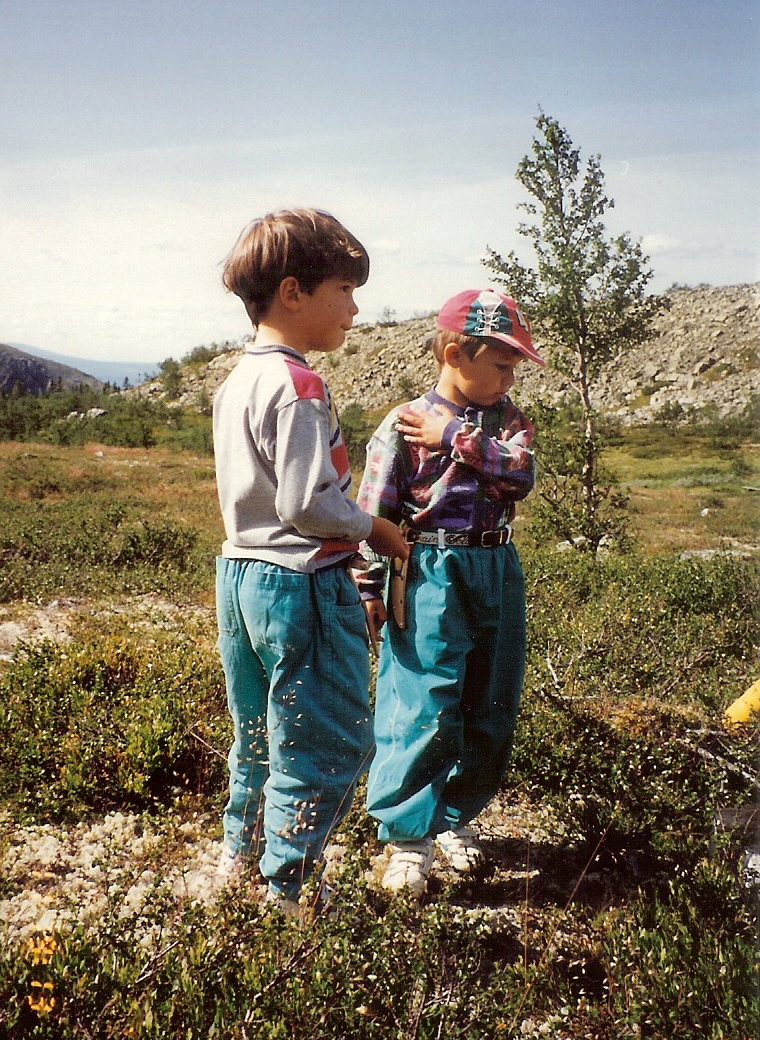 Me and my cousin enjoying the outdoors.

As I entered the playing-computer-games-phase in my younger teens I kept coming back to the forests when I needed some time to figure things out or just clear my mind. It wasn’t something that I reflected on at the time. But in hindsight it seems pretty clear to me that I definitely had some sort of attachment to nature already. Getting into my older teens this didn’t change much, despite other interests coming and going. I was mostly doing other things, but nature was always there for me, waiting for me when I needed it.

Had I realized at the time how important that connection was to me, maybe I’d reconsider where I went to college. I ended up moving to Stockholm, and life in the big city was definitely a contrast to what I was used to. One of the biggist changes was that I couldn’t take nature for granted in my everyday life anymore. I tried making the best of the situation – working hard to churn lemonade from the lemons I found growing in the concrete sea. But taking the subway in order to go for a walk in a park so small I could fit it in my back pocket just didn’t compare favorably to what I was used to. 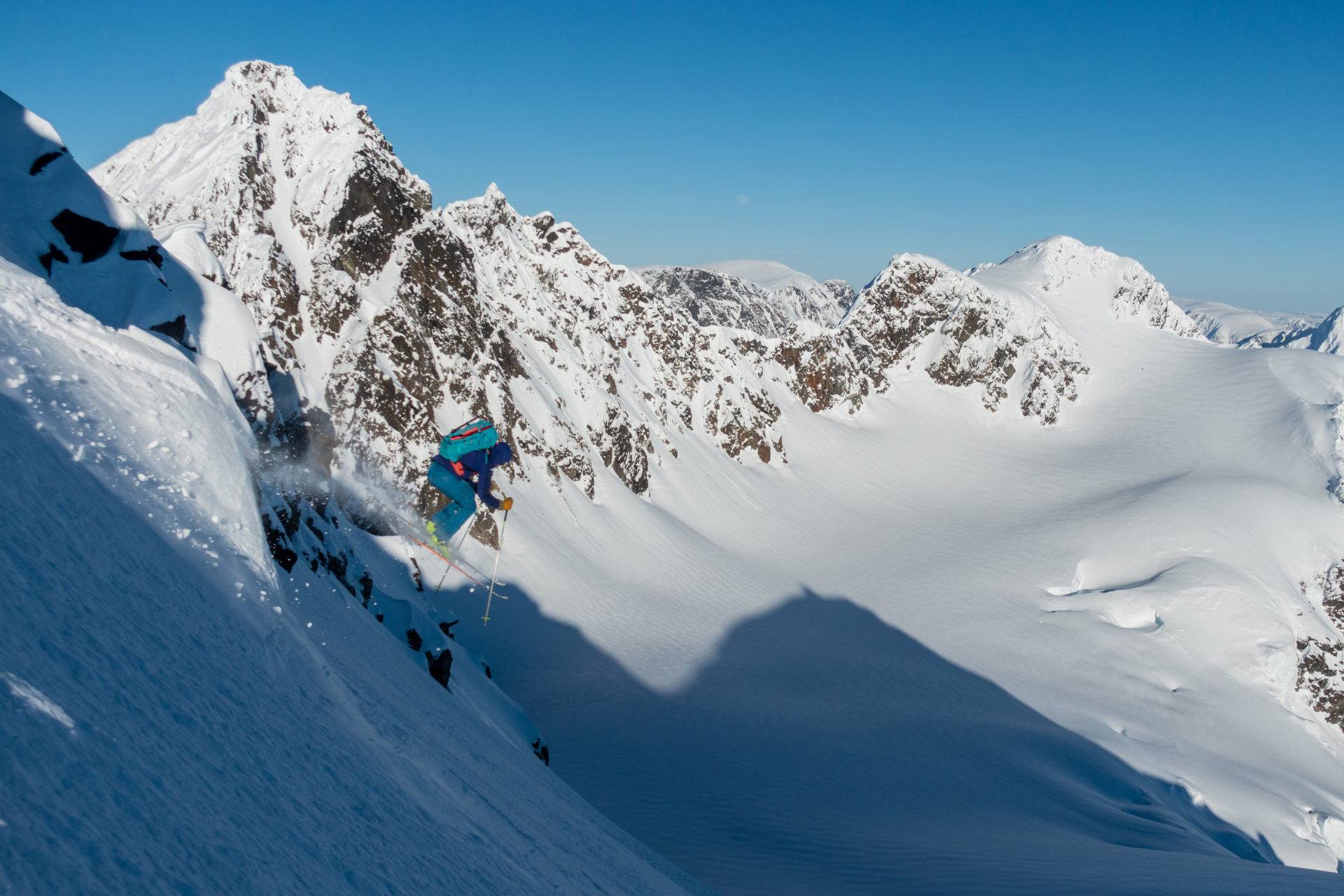 Taking off with a view. Photo: Michel Afflerbach

Eventually the “lemonading” brought fruit. It was during my big-city-years that I found climbing, an activity that not only helped me stay focused and in shape despite living in the big city, but also gave me so much experience and knowledge that I now apply in many aspects of my daily outdoor life. Partly rope technique and management, partly knowledge about body movement and friction, and partly just being more comfortable with heights and exposure.

Climbing also gave me opportunities to experience nature in a new way. A way that is more suited for the big city life. While hiking or running requires relatively big areas to remain isolated from the surrounding city, cragging is well suited for forgetting where you really are. As long as you’re at a cliff that doesn’t show high-rises from the top, it’s possible to spend many hours with a feeling that you’re really somewhere completely different. And while having to take the subway for a walk wasn’t what I was used to, having plenty of climbing cliffs accessible using public transit around was definitely nice. Turns out there are upsides to living in the city as well. 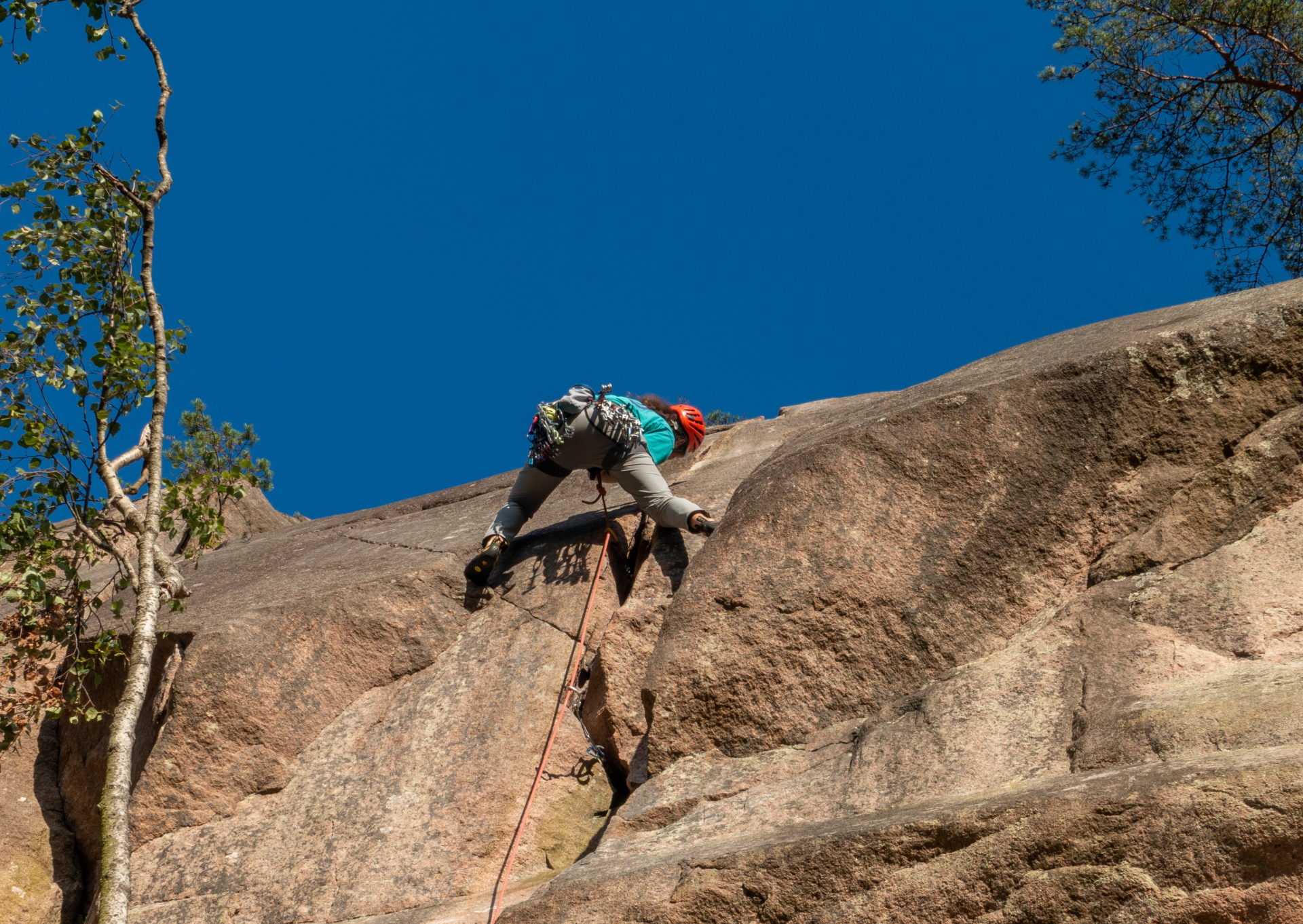 It took me 8 years to figure out that, in the end, the big city wasn’t for me. Another year or so to figure out the get-out-plan and carry it through. I ended up moving again, this time to northern Norway. To real mountains. Again, something new.Though this time I didn’t need any lemonading. With 5 years above the arctic circle under my belt, I can’t say that I’ve felt more at home anywhere else.

I once again get to spend my freetime in the everyday with nature, just as I did as a kid. Nowadays, there’s usually more altitude involved and, in stark contrast to southern Sweden, winter and snow comes around each year like clockwork.

“I spend my precious winter skiing and ice climbing. While summers are for running, scrambling and climbing.”

Moving to the mountains has also meant that verticality has started to tighten its grasp on all sports I do. Sure, from my years in the big city I’ve got climbing, probably the steepest of all sports. But living with endless possibilities in my backyard has certainly meant that everything else I do has become severely inspired by climbing’s most obvious feat.

While I ran to stay in shape when living in the city, up here I run to get out into the mountains. Naturally, my runs have gotten steeper and more exposed as a result of it. As for skiing, being able to spend so much time doing this activity has certainly allowed me to venture into terrain that I wouldn’t have thought twice about before. Especially since having found the enjoyment that is combining skiing with mountaineering. 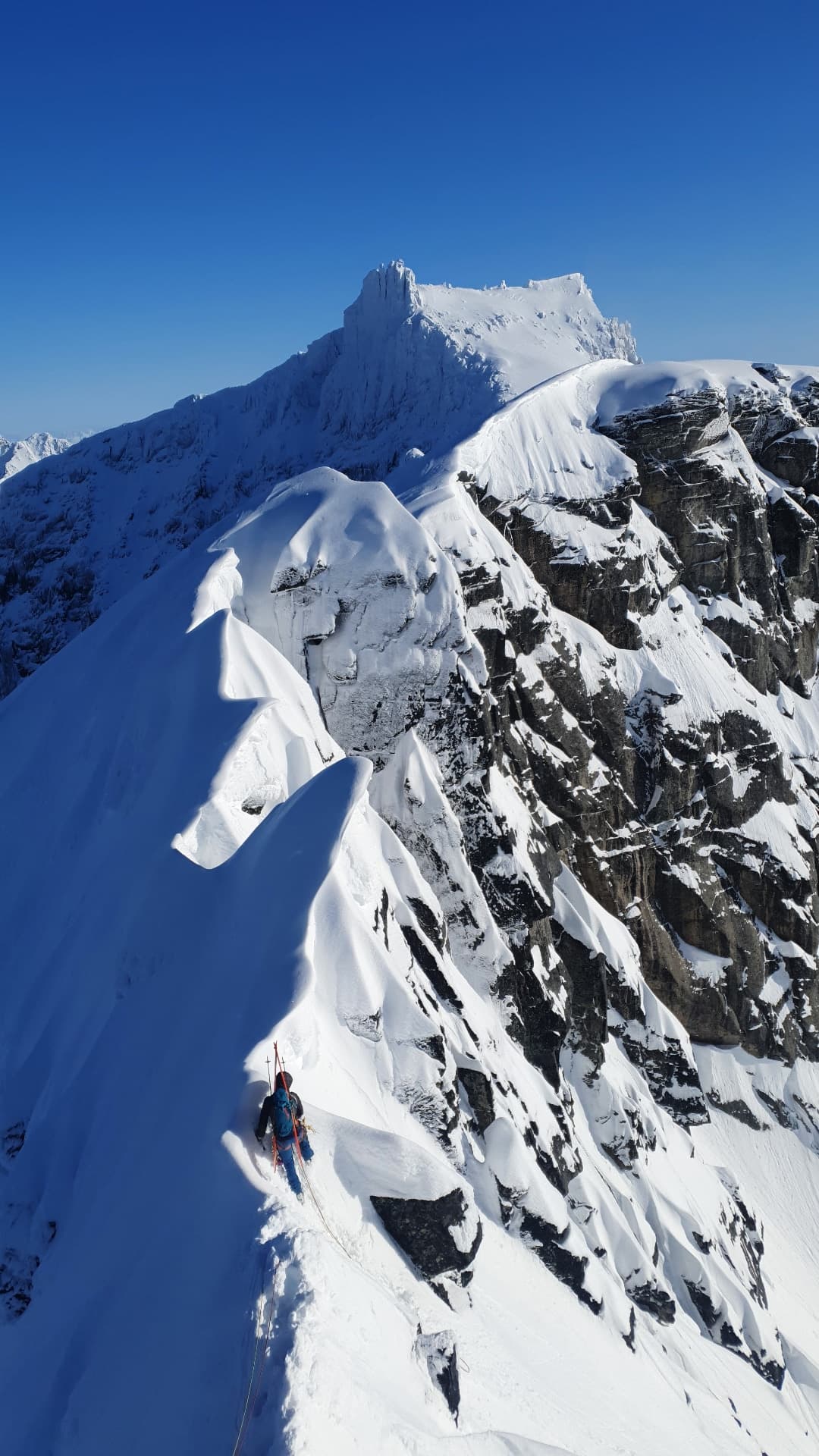 Perhaps ironically, I’ve become a weaker climber. Turns out that the best way to get strong as a climber is spending many hours training in a gym, keeping to a strict regime. It was easy to do when living in the city. But when the after work gym sessions compete with ski touring, an airy trail runs along a ridge or some outdoor bouldering. Well, the gym session keeps losing. On top of that, living in Tromsø often manifests a great deal of weather sickness*, and with the weather being in the driver’s seat regarding what activities you end up doing, it’s just not feasible keeping to a training schedule.

What I have lost in strength I have gained in knowledge about how to move efficiently and safely in a mountainous environment though. My previous ability to crimp up 30 meter high overhanging bolted routes, grasping for tiny holds, has been replaced by gunning up 300 meter crack systems on mountain sides, not spending more than a few hours on the wall if the climbing is within my abilities.

Both are climbing. But the two experiences are as different as the nature where I specialized in them respectively. When sport climbing around Stockholm, I was usually at a road-side crag in the midst of a sprawling city, while the mountains in northern Norway usually require a couple of hours of hiking into the wilderness before even reaching the start of the route, far from the nearest sign of civilization. Just like having a relationship with nature, one isn’t better than the other either. They’re just different. 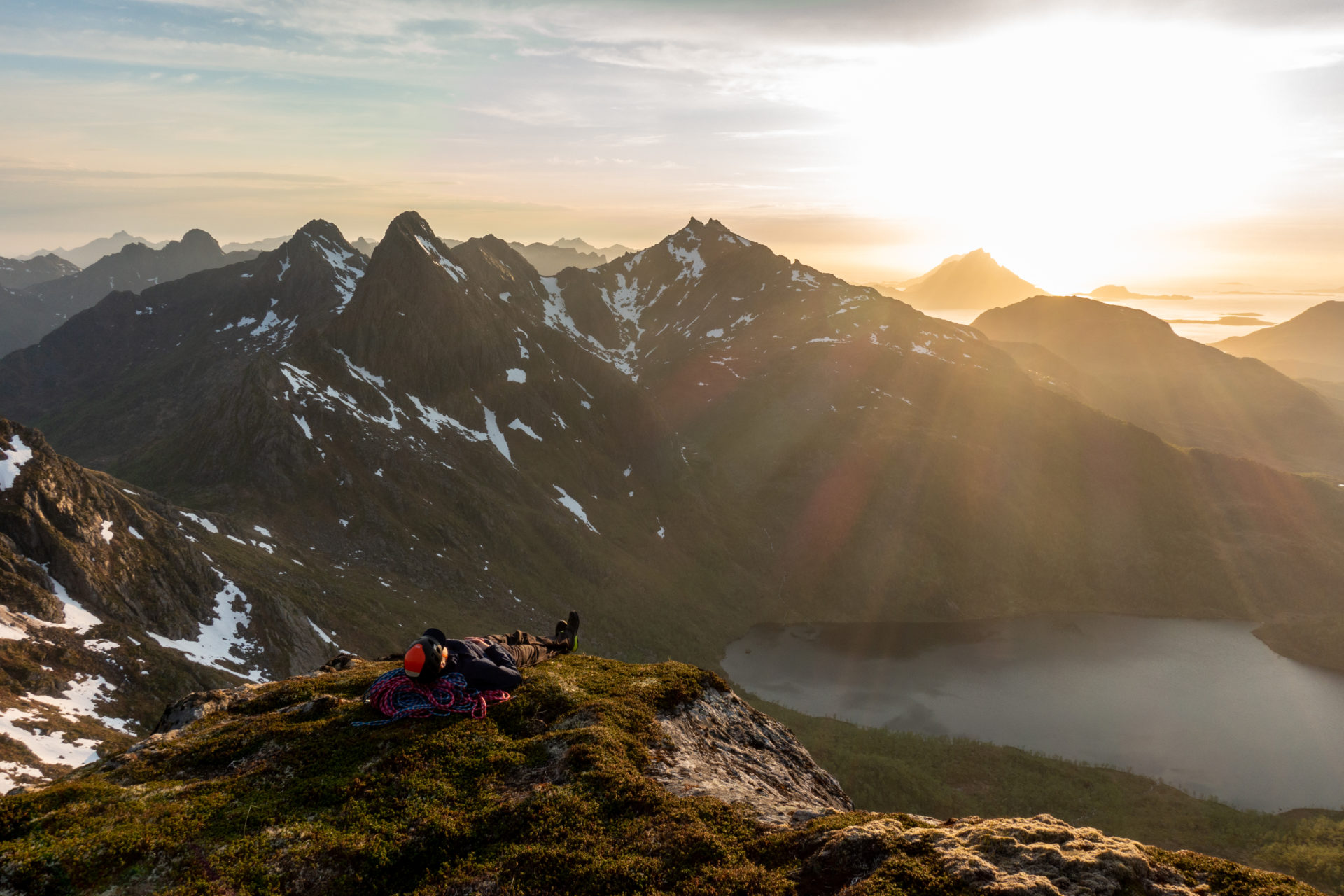 Having topped out a Norwegian climb, my rope partner enjoying a quick rest under the midnight sun.

I guess what I’m trying to say is that a relationship with nature can be very different. Sometimes it’s very intense and sometimes it’s not. One isn’t better or worse than the other. They’re just better suited for different people and for different stages of life.

I started out young, and my relationship with nature has always been there. In periods we’ve only been keeping in touch for the occasional meditative walk, and sometimes it’s been a daily affair. Looking back, I think it’s been quite clear to anyone watching from the outside that I personally would end up with a quite tight relationship with nature. Despite our relationship coming and going I don’t have any regrets, considering where I ended up.

*Weather Sick adj. (Norwegian – “Værsyk”): Feeling in a bad mood due to weather and/or feeling a high pressure to make use of any weather windows. 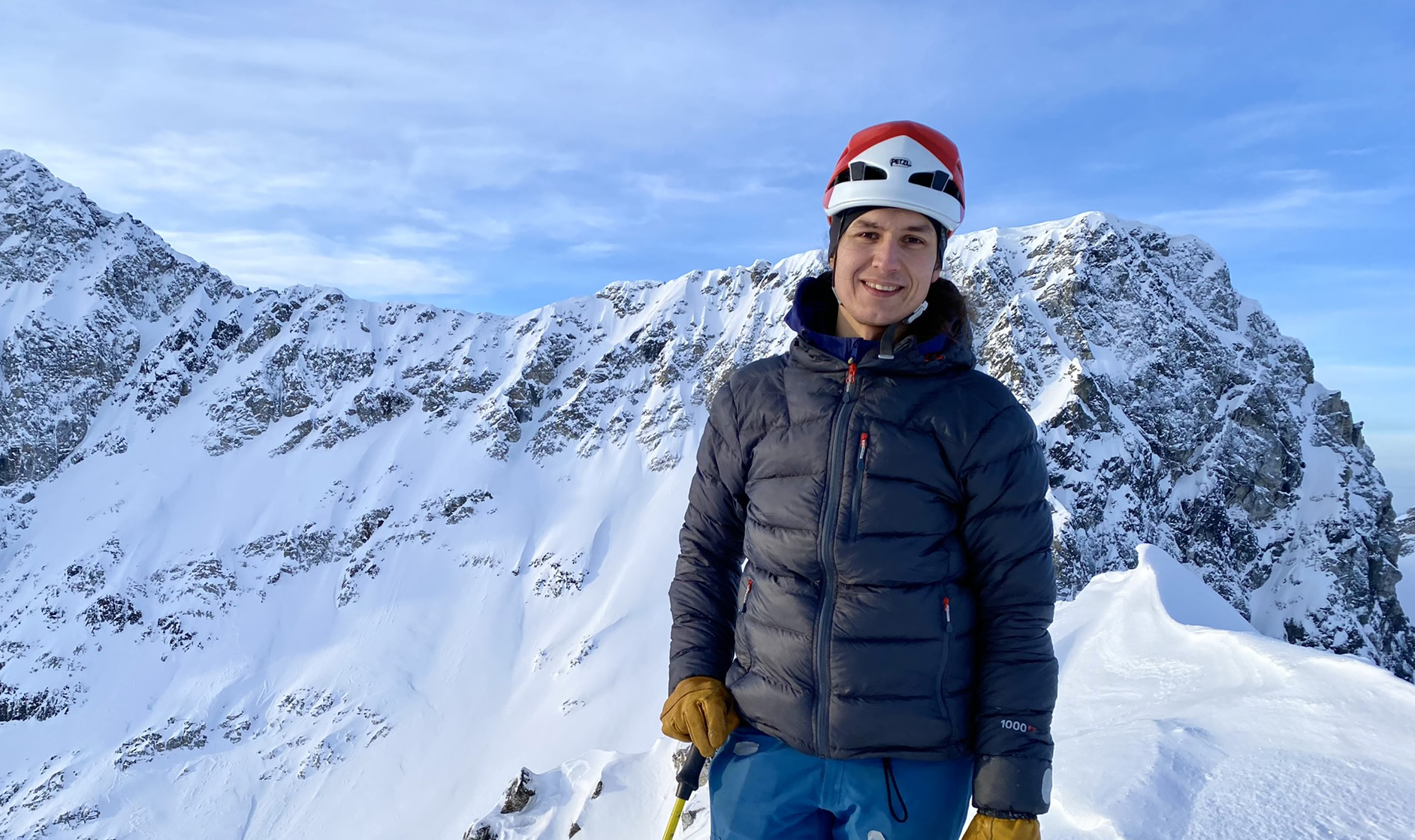 Out and about in my natural habitat. Photo: Ludvig Lenner

Originally from Sweden, Oscar grew tired of living in flatland and headed westwards to Norway, ending up in Tromsø. There he spends his days enjoying the 6-7 months of snow season doing ski mountaineering and ice climbing. When summer eventually arrives he continues his high altitude lifestyle, switching ski boots for climbing or trail running shoes.

Creating an Inclusive Environment for Women in Ski Touring

Skiing Through the Polar Night