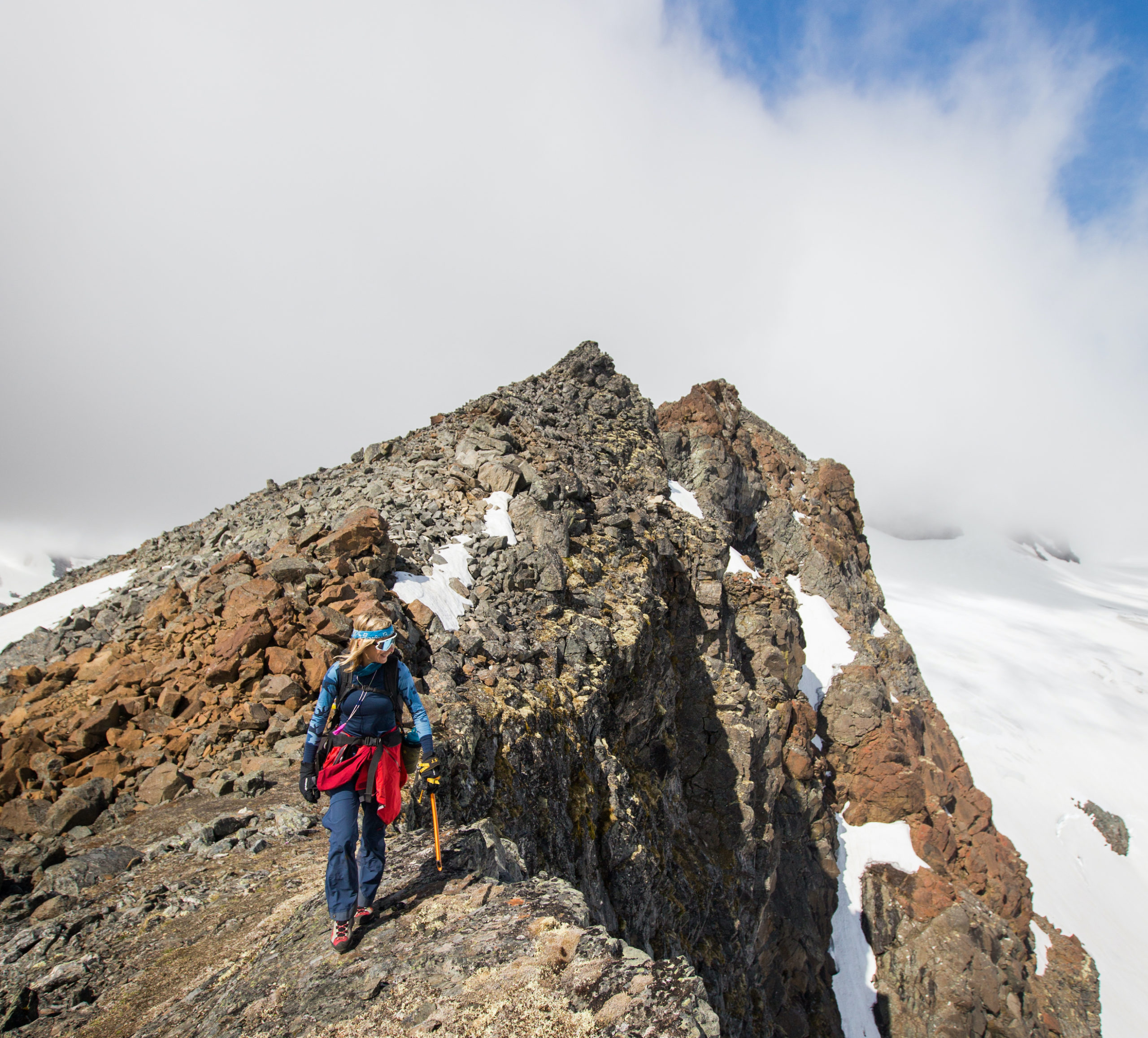 The Story of the Bukkeholstind Traverse. 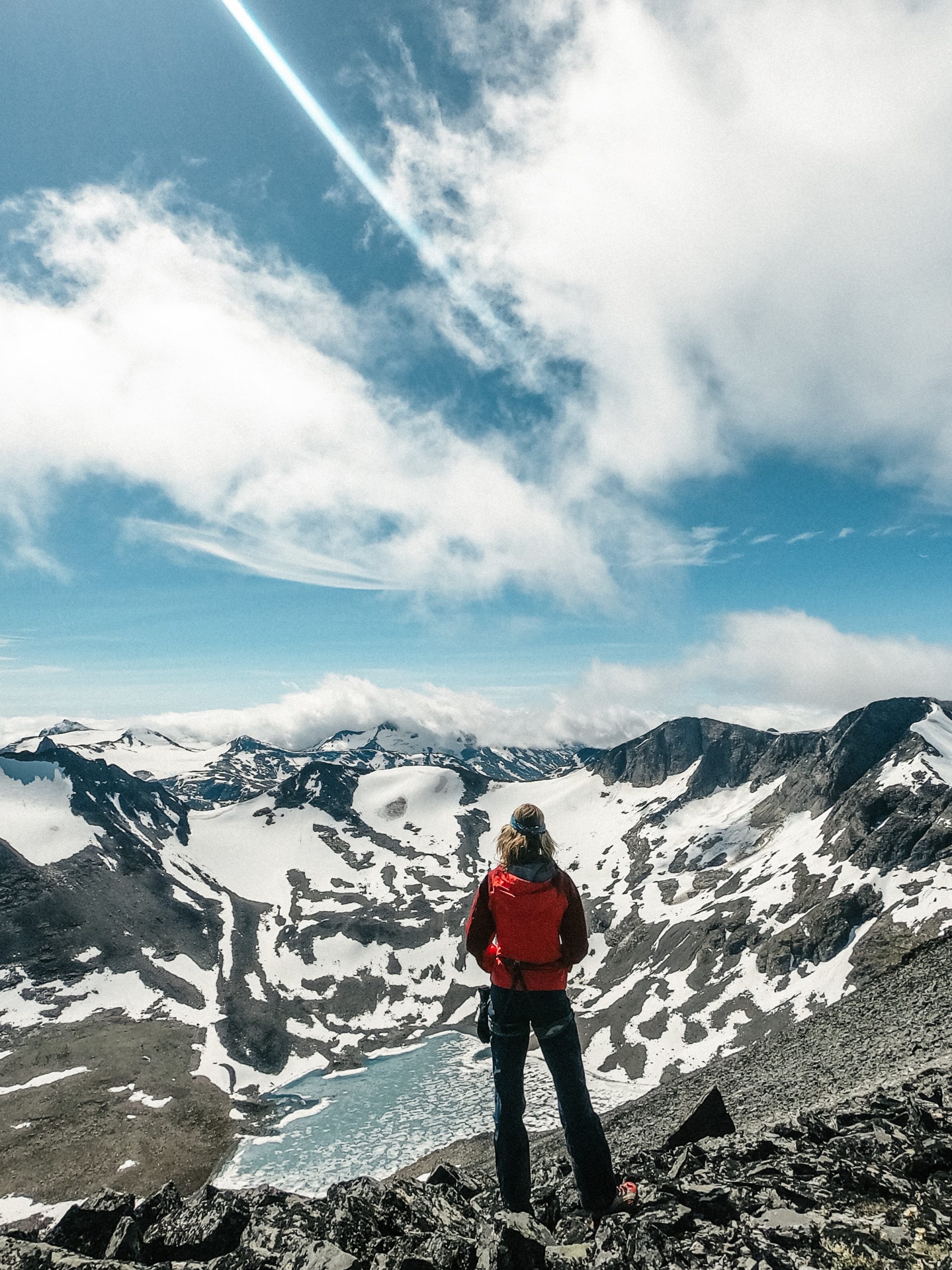 We are nature photographer and hiker Live Andrea Sulheim, aka Anatoli Boukreev, and hiker Elisa Røtterud, aka Scott Fischer.
Two mountain-loving souls with respect for their surroundings.

On a sunny day in early June, we depart from Leirvassbu Mountain Lodge at 07:00. We estimate that the trek will take 15 hours to complete, allowing time for photography, a couple live broadcasts on Norrøna’s social media platforms, and several snack breaks with panoramic views.

There are some lofty and tricky sections, but you certainly don’t need to be a rock climber to do the trek. You’ll manage just fine as long as you have good hiking skills and are physically fit.

We don’t cross paths with anyone else. Not a soul!
Wow, how fantastic, we remark contentedly, and we move nimbly at a steady pace.
The euphoria mounts when I find a heart-shaped stone weighing a couple kilos. Another one for my collection, I squeal with glee and toss it in the pack.

We conquer meter after meter. By the time the clock approaches 15:00, we have crossed ten 2000-meter peaks. Easy peasy, I think.
Maybe that’s why I’m the Scott Fischer of our friendship. Because suddenly we stop.
Wet rock slopes and snow surrounded by sheer mountainsides have brought us to an abrupt halt.
– “This area should have been nice and dry now,” Anatoli says.
– “We’ll have to take an alternative route to keep going,” I respond, checking the time. 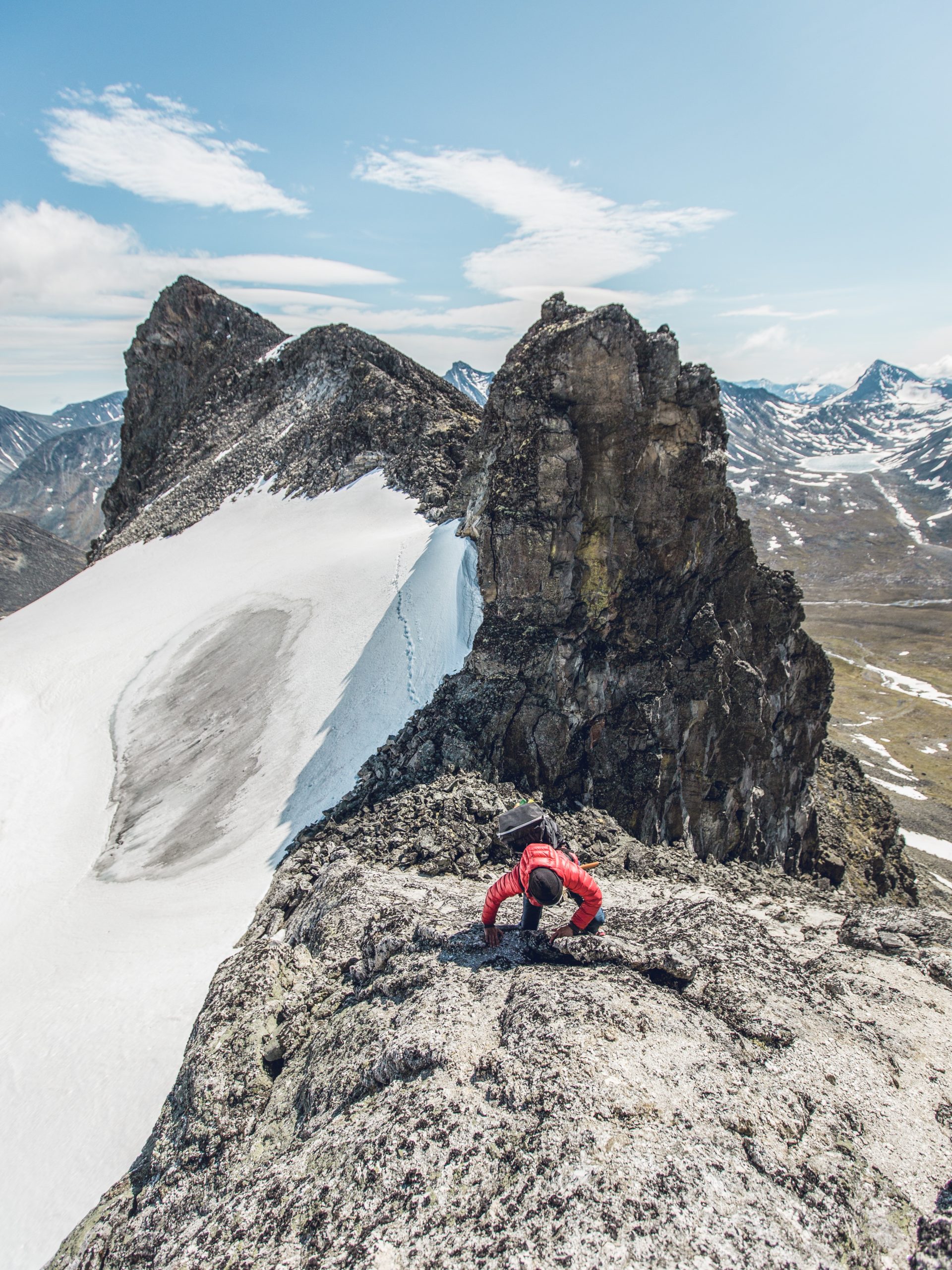 We assess the area and finally find a section that seems manageable.
– “I’ll help you around this corner, then you climb up and see how it looks,” I suggest to Anatoli.
She sets the pack down and starts heading up.

– “It’s fine up here,” she shouts from the top and throws the rope down.
– “For God’s sake!” I yell as I watch the rope get caught in a crack.

Like a jewel thief, I creep as far as I can toward the rope to try and pull it free. But it won’t budge, and I can’t stretch far due to the sheer cliffs on either side of me.
We curse loudly.

The wind picks up considerably, just as the weather forecast predicted, but of course it doesn’t matter when you’re wearing
appropriate clothing. The hard part is trying to have a conversation when your voices are being carried away.

– “I’m starting to get really hoarse now,” I shout after two hours have passed. And by that I mean, of course, that you also start to get tired.

The clock is suddenly showing 23:00 and the wind is howling like a wolf in our ears. 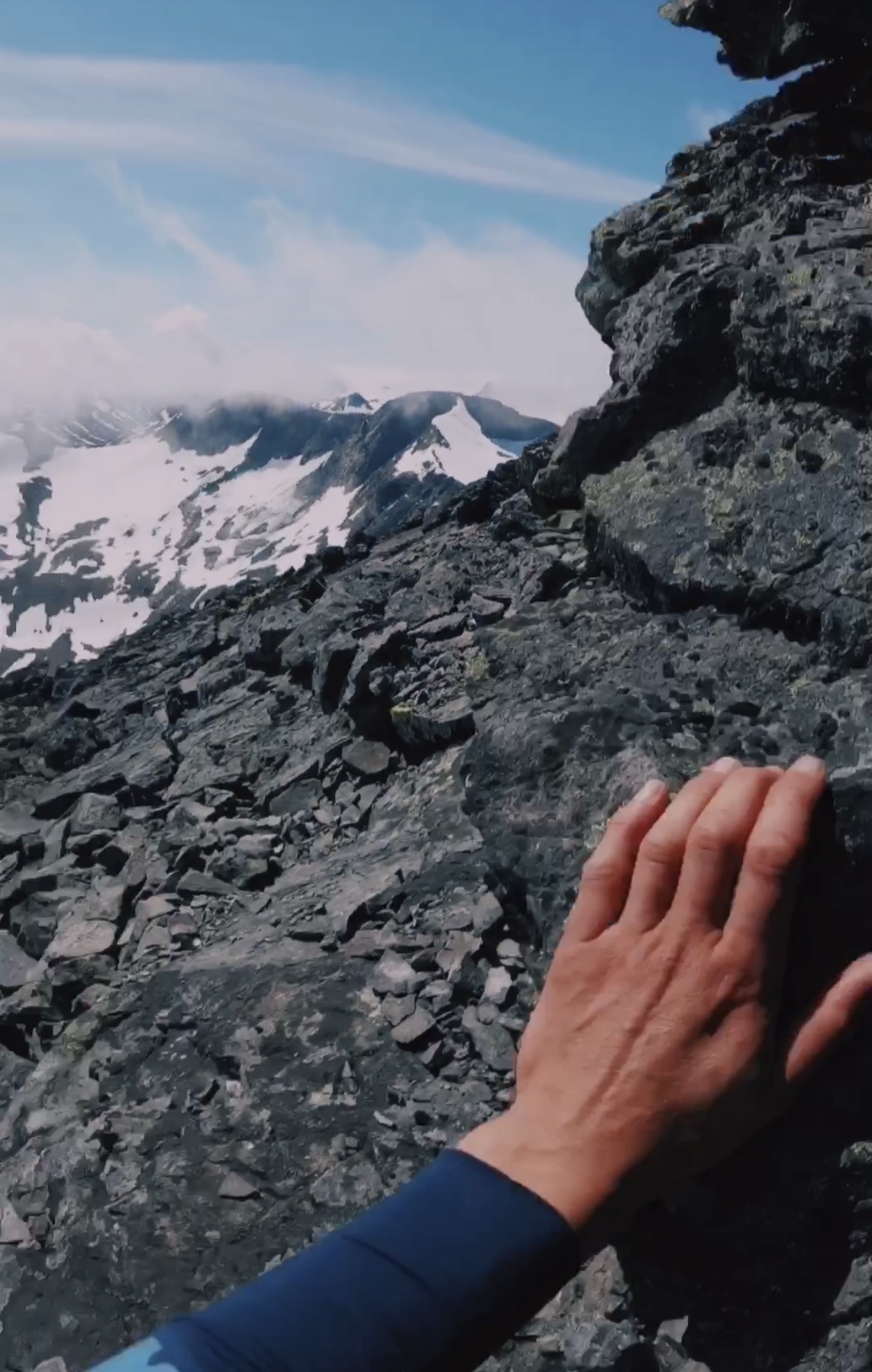 Like a jewel thief, I creep as far as I can toward the rope to try and pull it free. But it won't budge, and I can't stretch far due to the sheer cliffs on either side of me. We curse loudly. 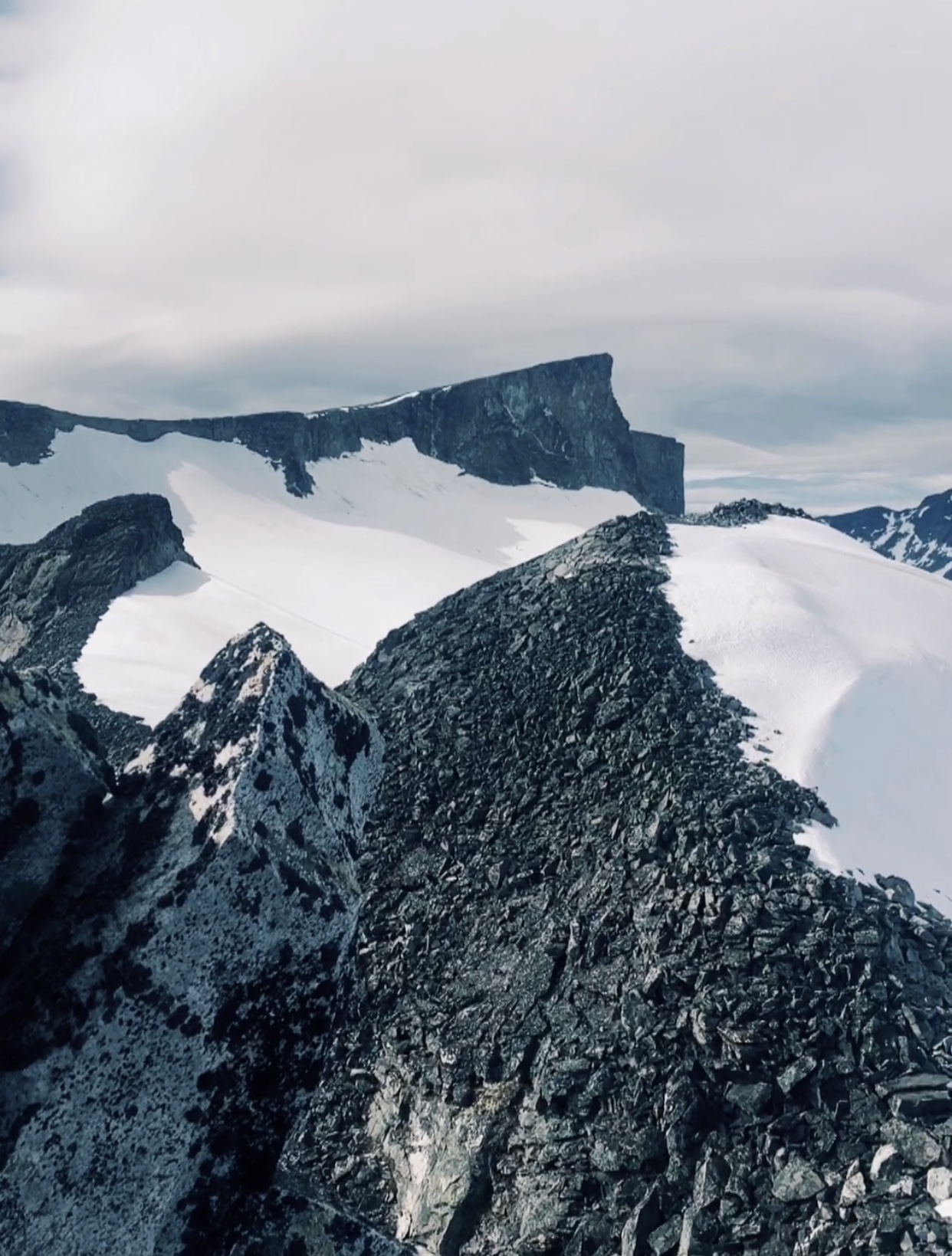 “Go find a 4G signal,” I shout to Anatoli. “Get in touch with Leirvassbu!” Maybe they know of other people on the mountain!
I don’t want to call 113, the emergency service number…

Anatoli heads off, and I find a hollow where I lay down to eat a piece of bread with peanut butter. I need energy and a clear head right now.

Stranded on the trek, we lie there, ashamed, on our respective sides of the mountain. 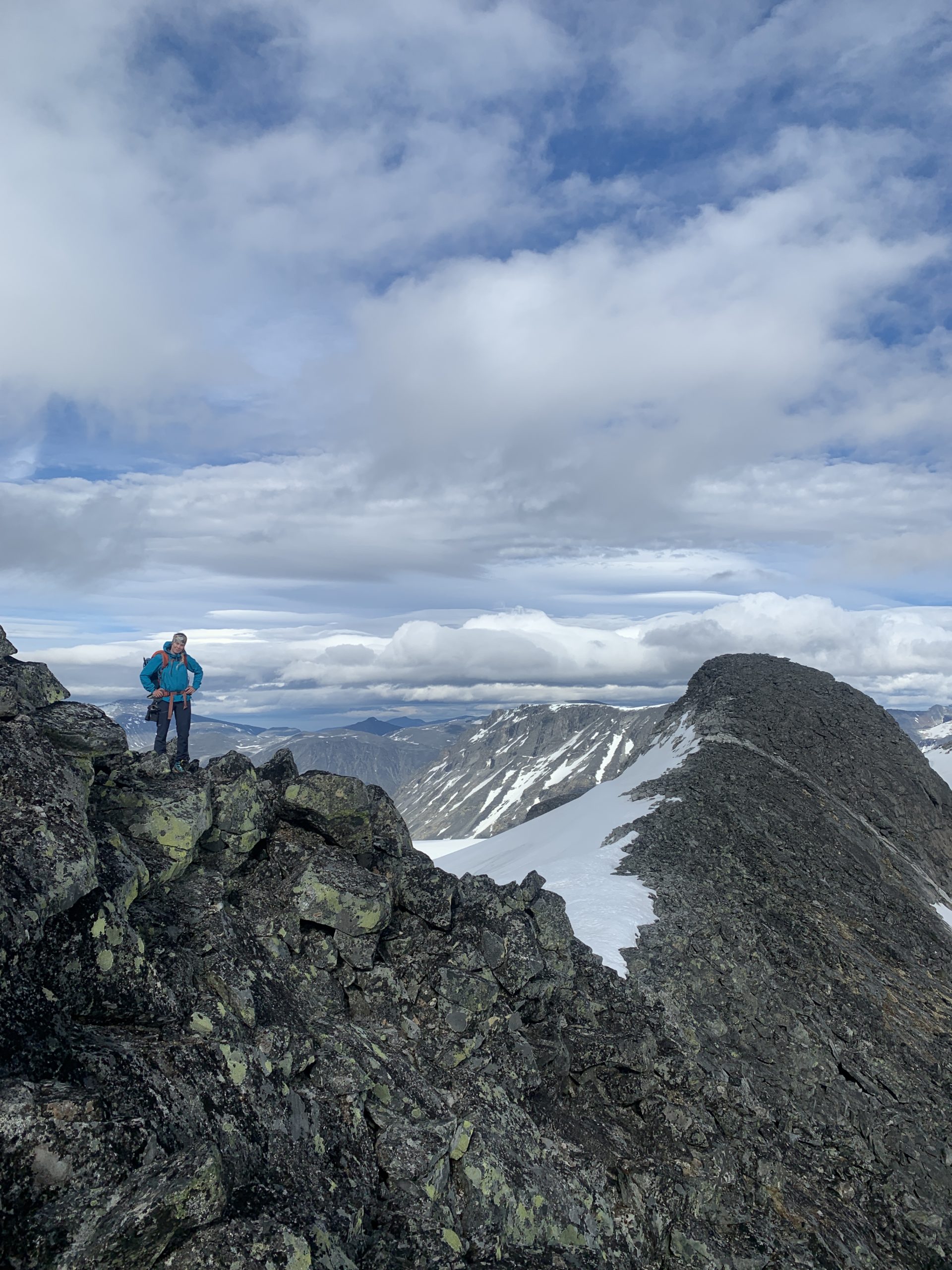 Whop. Whop. Whop. The sound of the helicopter in the distance and a speck approaching us. The clock reads 00:00. But the wind is fiercely strong, and the aircraft quickly turns back.

I have a wind sack and am licking peanut butter off my fingers.
Things aren’t as good for Anatoli.

– “Just throw down a rope,” I shout, hoping that the rescue team can read lips.

The wind takes hold of the craft and suddenly it careens down the side of the mountain.
For a second I think the helicopter is going to crash, and I gasp and cover my ears.
“What have I done?” I think as I feel the tears start to fall.
This is starting to play out like a nerve-wracking action movie!

– “Anatoli, are you okay?” I yell as loudly as I can.
I can’t quite make out her response.

Whop. Whop. Whop. This time, the ostentatious machine is coming directly toward me. I hold on to a rock. A door is pushed to the side and the waving arm of a man in dark clothes reaches out. The time has come.

I stand up and immediately feel a strong arm pulling me into the helicopter. I practically fall in and land on my stomach as I slide into the empty aircraft.
I’m later told that the rescue team had discarded all their inventory to get to us.

Whop. Whop. Whop. The helicopter wavers from side to side before speeding down the mountainside.
Good god, I hate riding in motorized vehicles. 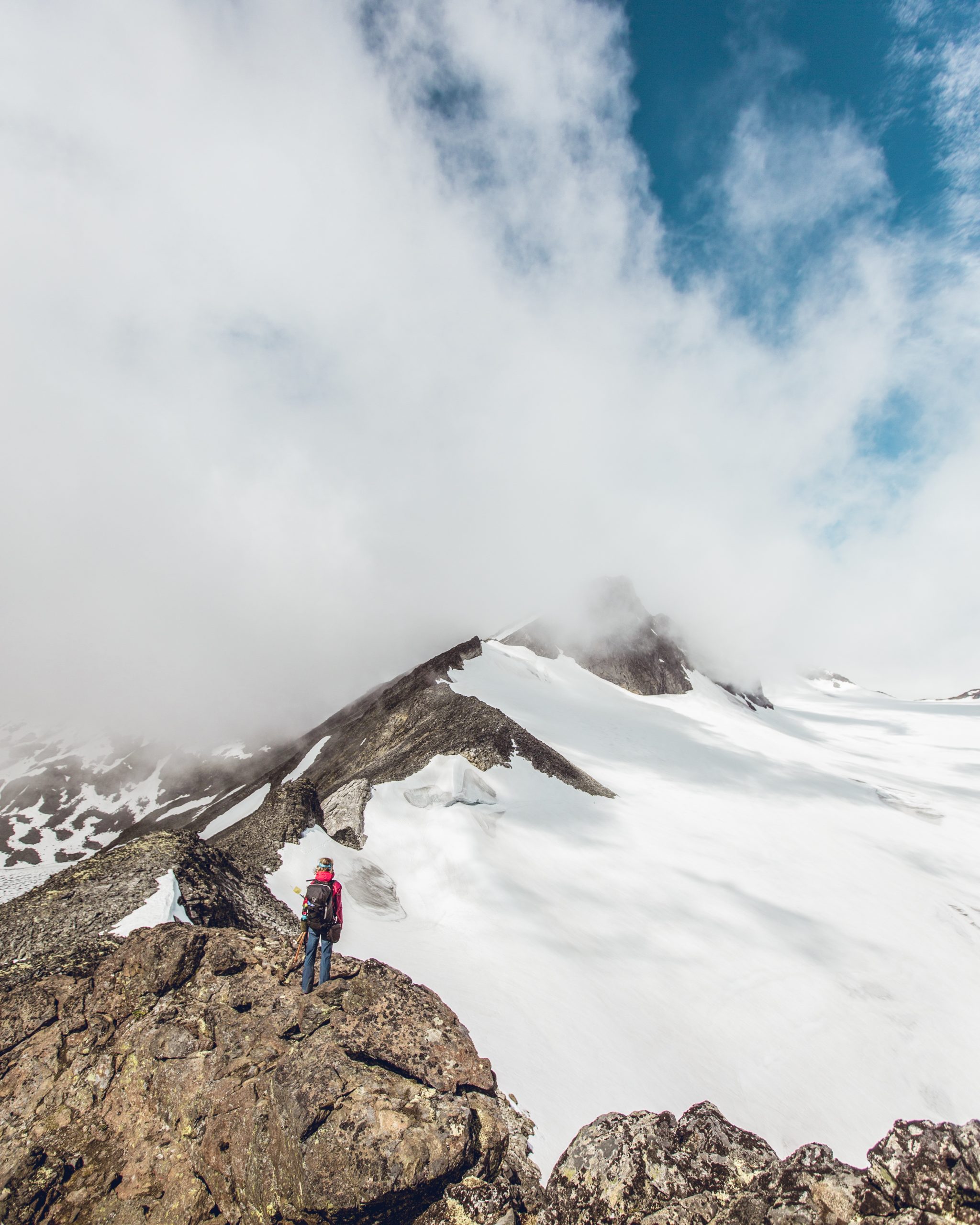 My rescuer takes my hand and looks into my eyes. This must be his way of communicating, I note, but still I’m somewhat irrational:

– “Am I putting your life at risk now?” I wheeze. “That’s absolutely not what I want!”
He shakes his head determinedly but calmly and maintains eye contact.

Before I know it, I’m on the ground and being spit out of the helicopter. It’s Anatoli’s turn.
She appears, descending down a rope, 15 minutes after me.

This wasn’t supposed to happen to hard core peak baggers like us.
But it did. 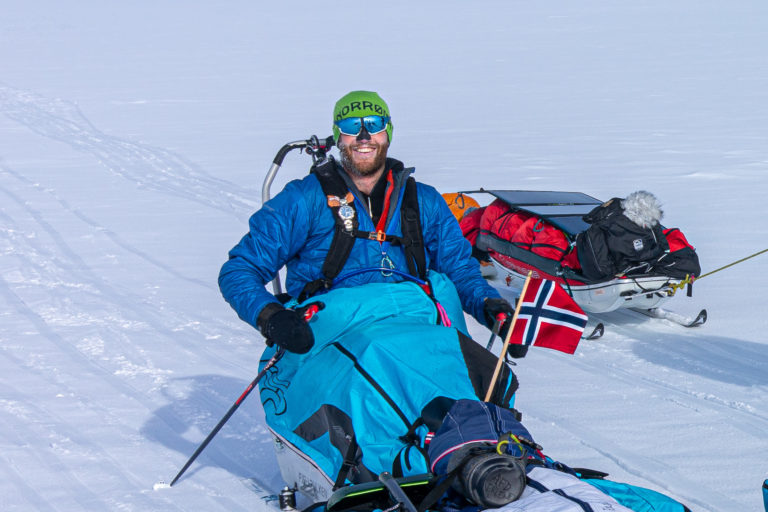 The Dream of the Greenland Crossing part 2 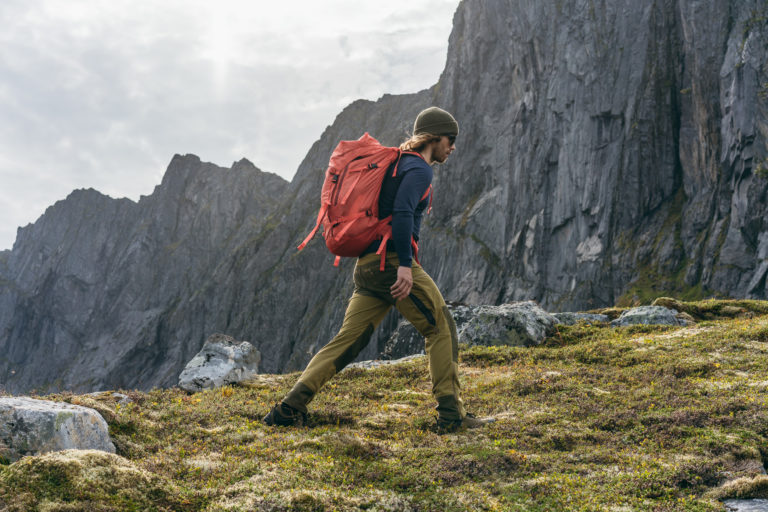 5 beautiful reasons why we love hiking