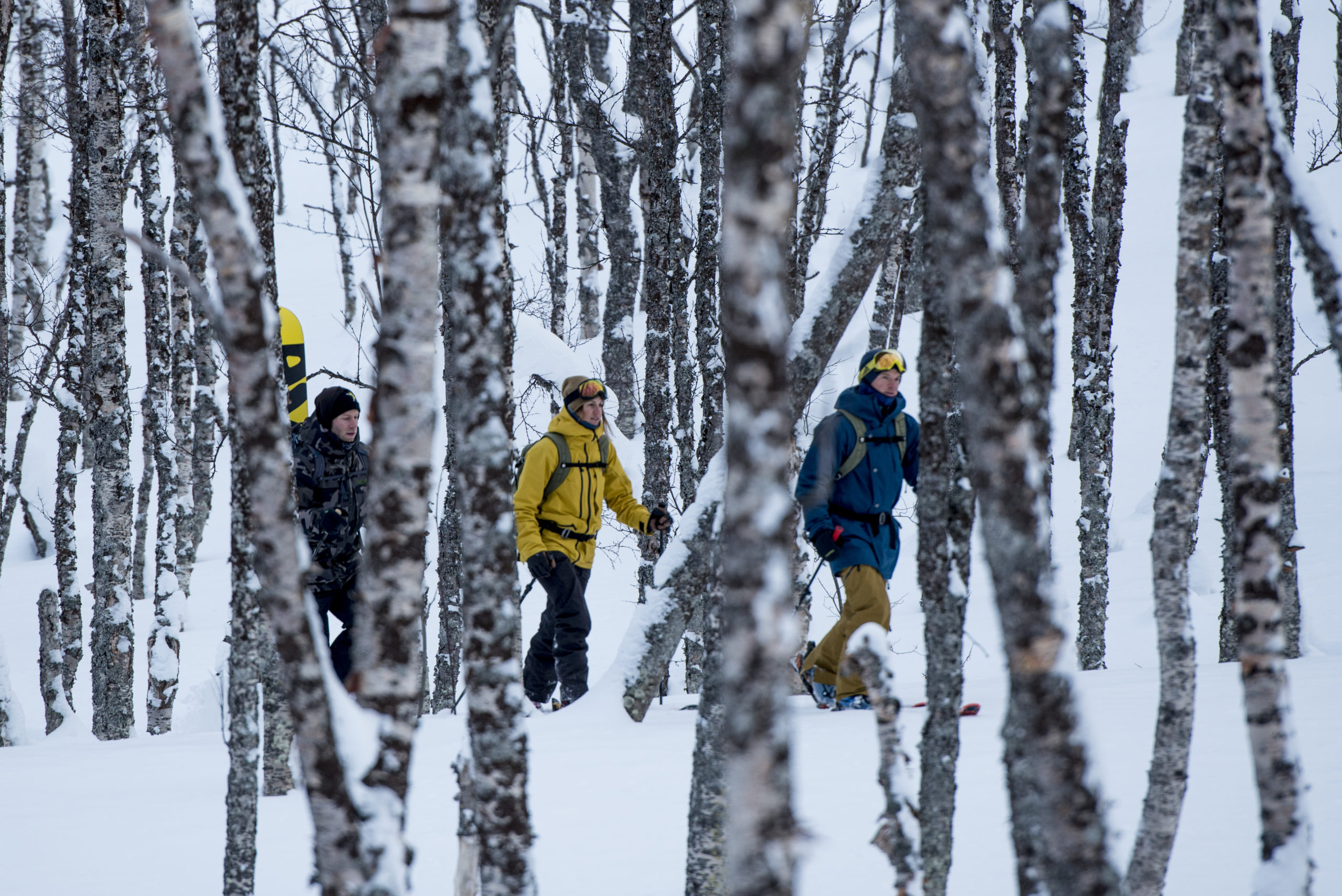 The same goes for places. Rare pearls are never found hanging in a row on a necklace but often spread around in unfamiliar territories where only a limited number of people have set their foot. Looking for these rare beads is not always as easy as it seems. Patience is crucial and the ability to adapt to unfamiliar terrain is measured already with the first step.

With that said, it’s about time to put an end to this romantic portrayal, place four Norrøna Ambassadors and two crazy photographers in a car and drive from Tromsø airport to Tamok valley. When you arrive in Nordkjosbotn you park your car, call the local guide and enjoy a black coffee while you wait for the reindeer taxi; which you, of course, have booked in advance. Then you put a big fat line over the previous sentence and learn the first Northern Norwegian lesson; stories up north need to be taken with a pinch of salt. , 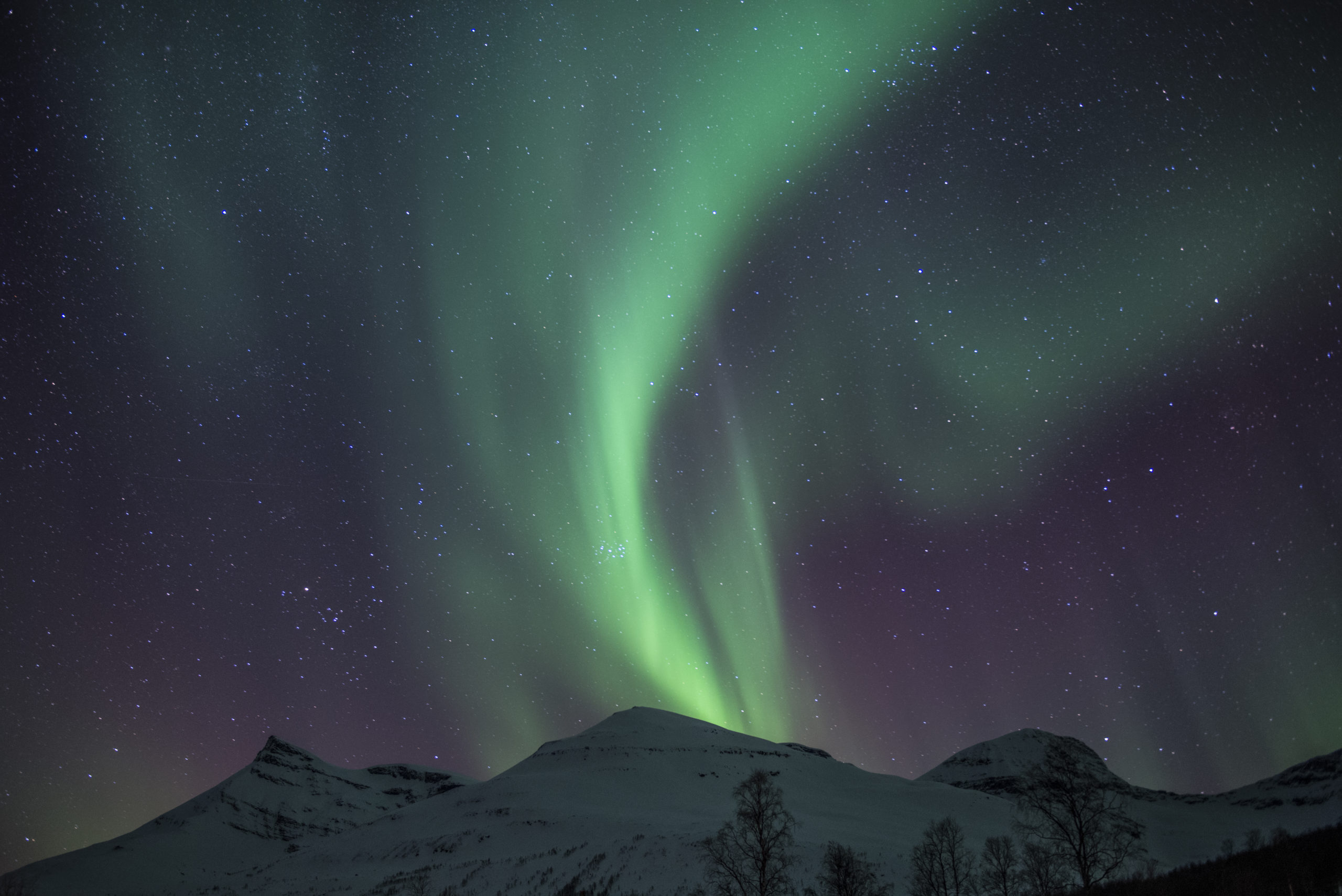 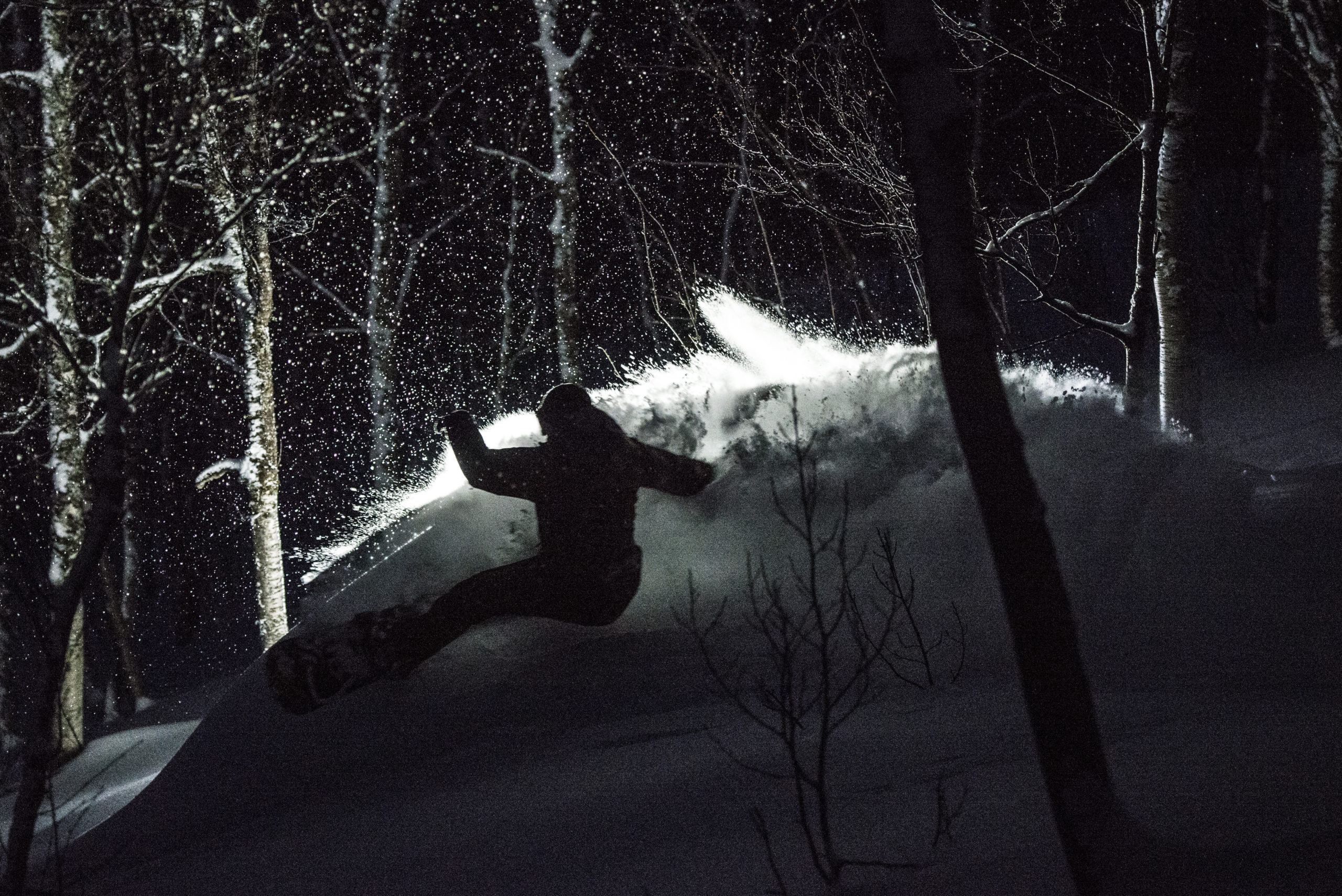 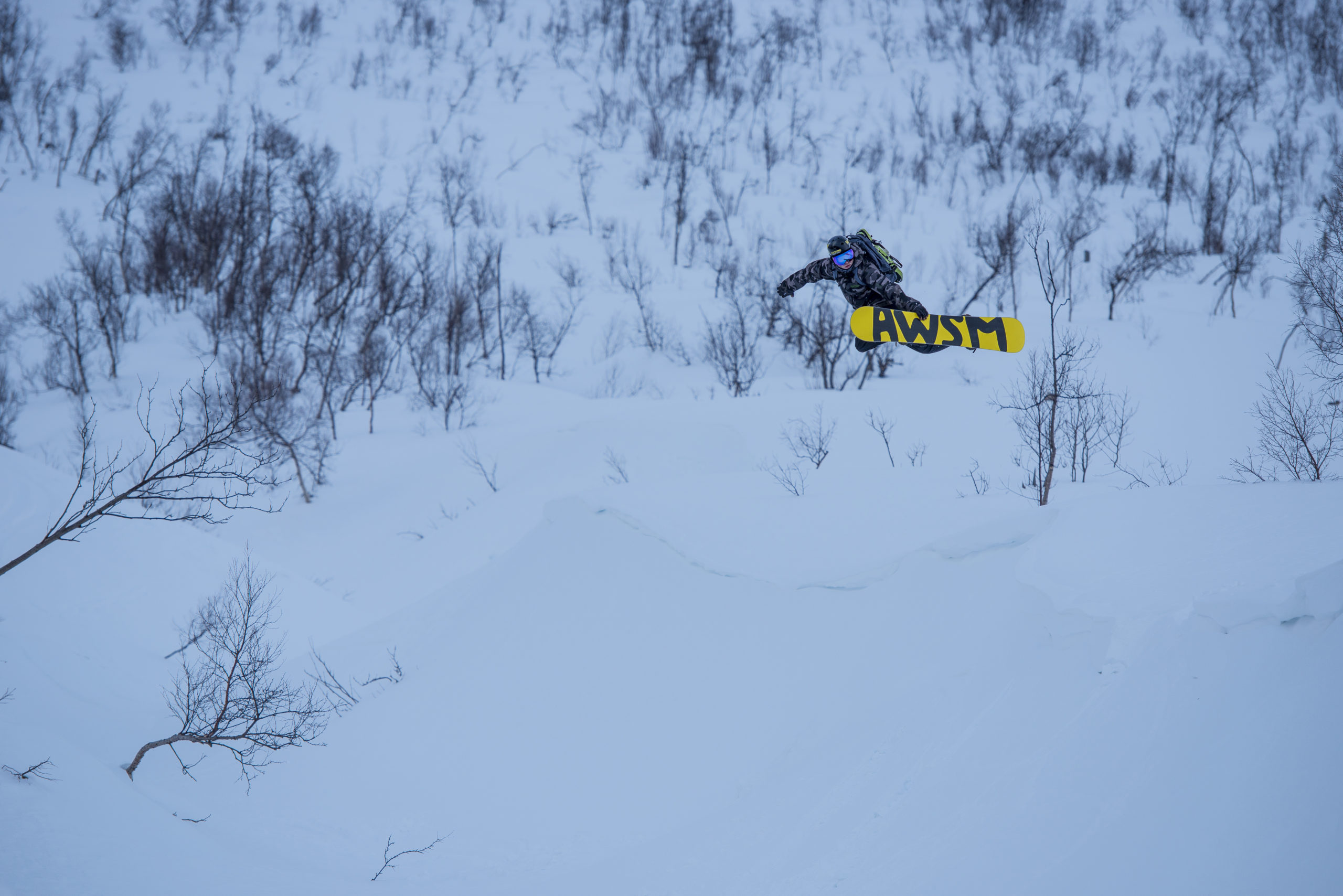 From Nordkjosbotn you need to make sure you take off in the right direction. Don´t be alarmed by the fact that this place is known as the largest intersection in Northern Norway. There´s really only three directions to pick from and if you don´t count the way you came from, you ’re left with just two options. Put it this way, if you think there will be a large sign that reads Tamok valley, you´re wrong. If you´re not already one of the locals a GPS will pay off. Then, when you finally arrive, you can be sure to rest your eyes on, absolutely nothing – it´s pitch dark.

The living room in Olsrud Adventure is covered in pine panelling and the atmosphere is good. Photographer Sandbech and Ambassador Wiig have just discovered the newest animation effects on Snapchat and in between a roar of laughter the chief himself arrives. His head is kept warm by an enormous hat off some kind of fur, Gore-Tex adorns his upper body, while his precious parts are covered with a less waterproof material – a towel. His cheeks are rosy after some well-spent time in the sauna that is located a little further down the road. He is our local guide and his name is Aadne.

Aadne is one of the 5720 residents in Balsfjord municipality where the valley is located. He is a contractor with quite a lot on his plate but no matter what he fills it with, you can be sure it has a taste of Tamok. “It is all about resources. The resources we have are long winters, lots of snow and big mountains”. Along with the old snowboard legend Jarkko Henttonen time invested in placing Tamok on the map is countless. By arranging several freeride competitions they are slowly but steady moving towards success and on the two-year agenda is a ski lift. “People in Tamok are 99,9% positive to change, as long as you don´t park your car in the wrong places,” Aadne laughs. 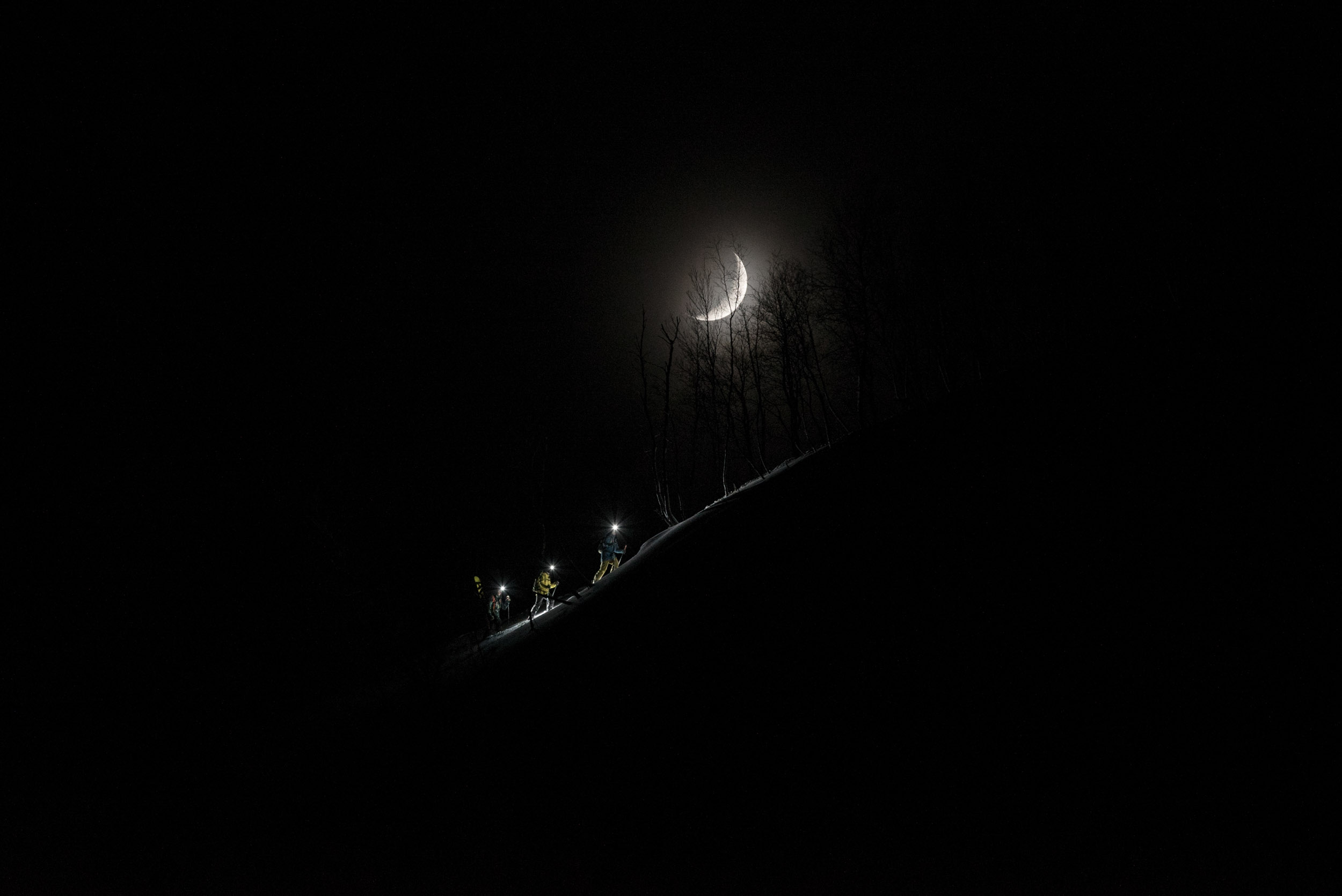 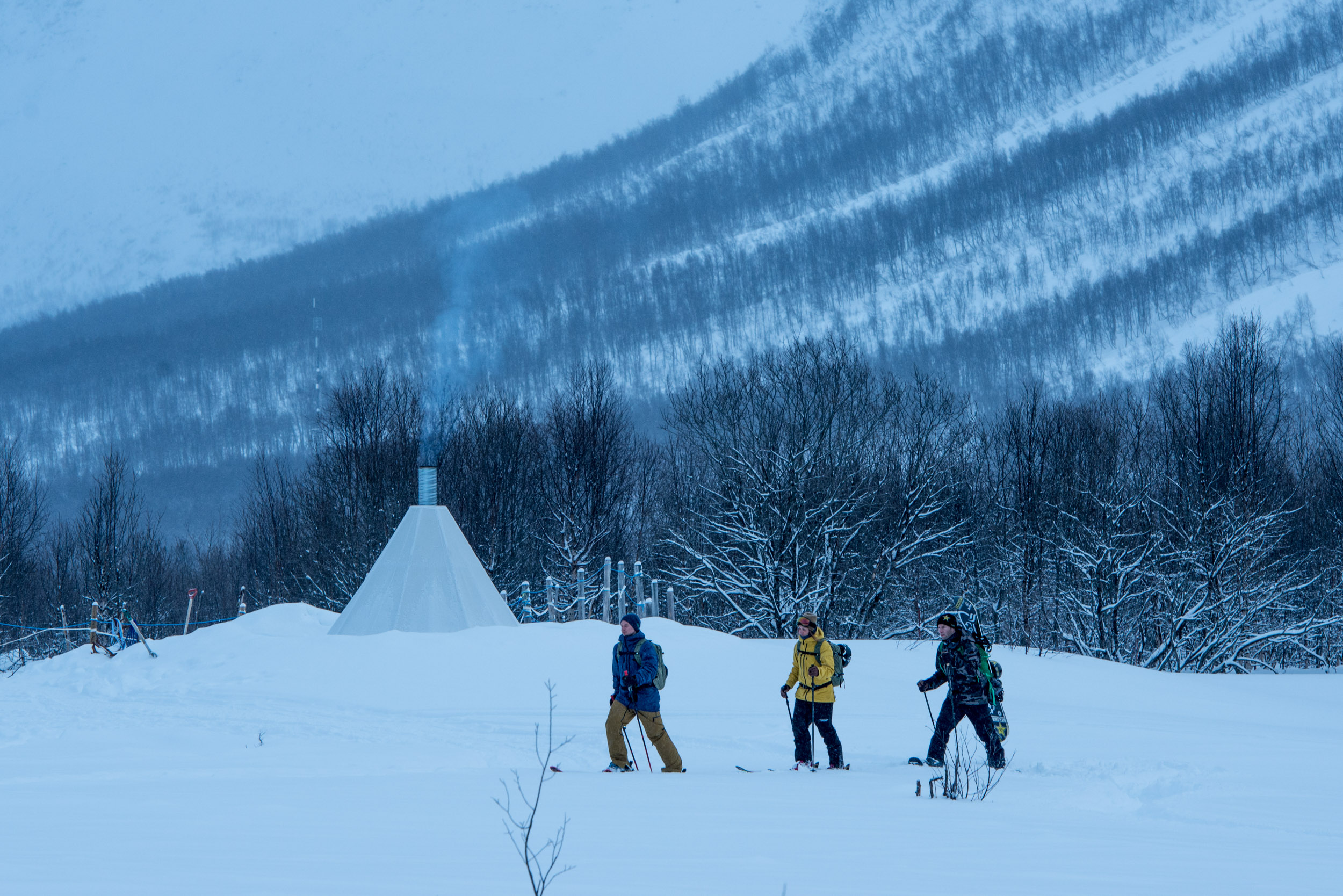 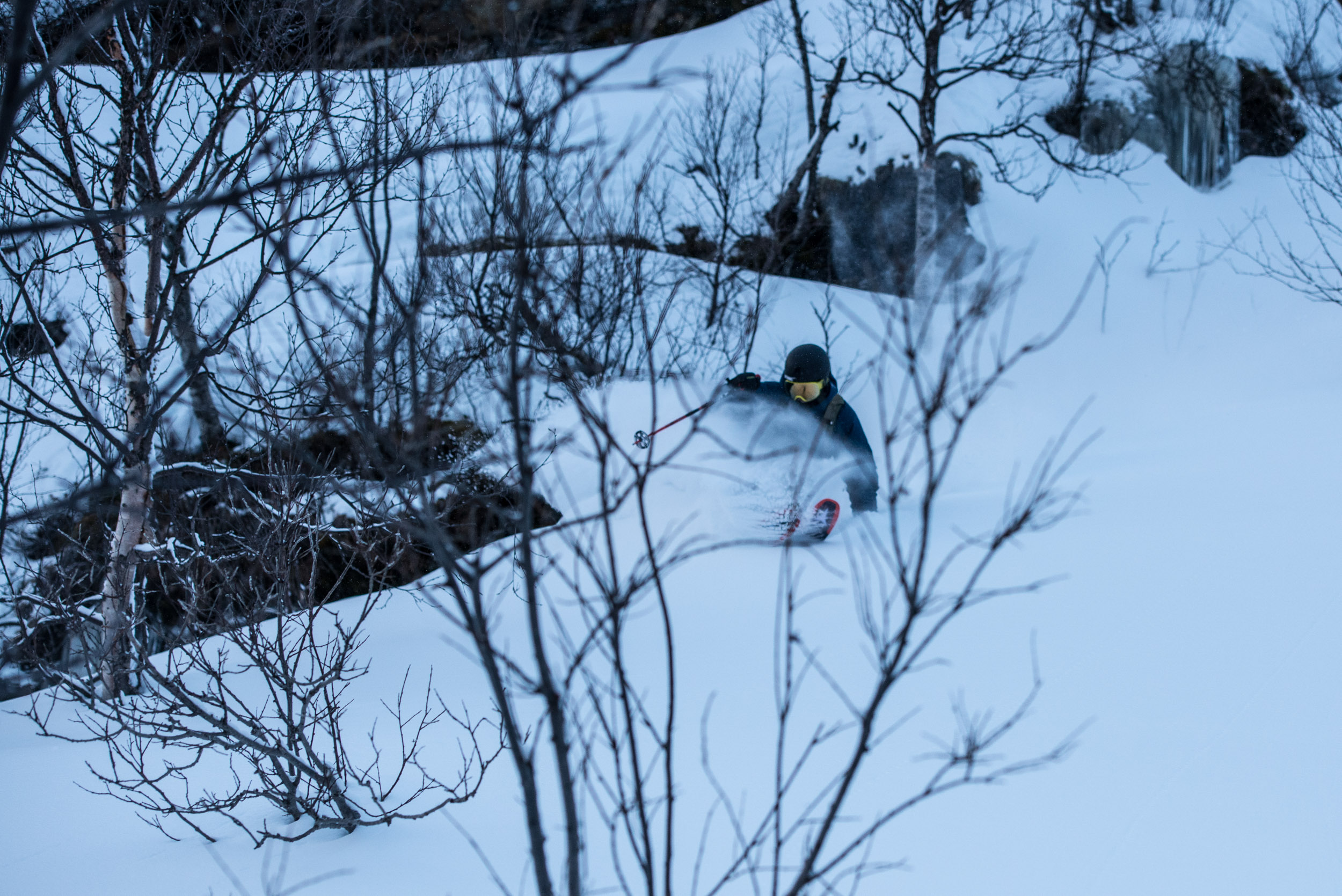 It’s early in the morning and a bluish flat light settles over the valley. Finally, the outline of what the valley has to offer, can be seen. At first glance, it may look like birch trees have invaded the area which incidentally is true but glance again and you´ll see what’s in between. This is where you´ll find the playground, a plethora of pillows, gullies, rocks that form jumps and that´s just before you see the potential above the tree line. The only thing standing between you and the scenery is your own creativity, still the hours are limited. Although we came for the dark, scouting for the right location needs to be done before the light fades out. “Did everyone remember to bring their headlamps?” Photographer Holter asks – Wiig looks guilty, he did not remember and we turn the car around.

Darkness creeps upon us and so does the cold but in the north you can´t really complain about that. None of the riders have ever done runs in the dark before. “I am not afraid of the dark” Tritscher hesitates. “I heard something about the wolves but no I am not afraid of the dark”. Hargin also denies being afraid, “the challenge of riding in the dark is that you only see the things that are directly in front of you. You really don´t know what’s coming ahead”. 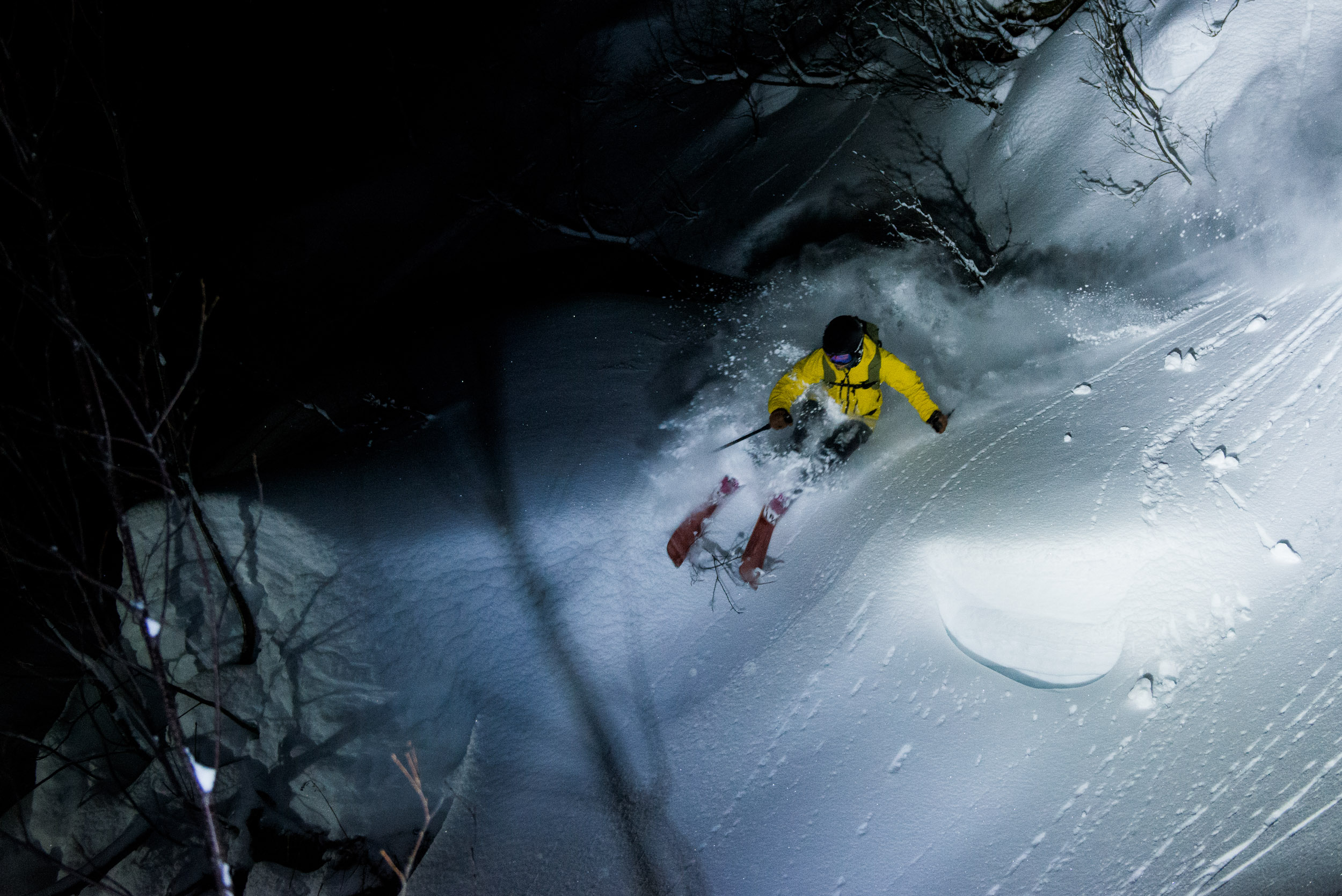 It´s a new moon and we watch the ambassadors walk up a hillside while we wait to film them ride down. Longing for the polar nights to be over in the north might be compared to the time spent waiting on shoots like this. However, years with experience have taught photographer Holter and Sandbech quite a few tricks on how to stay warm and entertained when the wait draws out. Amongst their repertoire you will find; play fighting with each other, countless failed attempts to do summersaults, pushups and speed checks where they basically just run back and forth. Suddenly Tritscher, Wiig and Hargin finally approach the edge of the hillside. In this moment Tamok lets us in from an entirely new perspective. In the few meters that’s left from standing on the top off the hill the moon decides to meet the ambassadors halfway. A magical moment appears and for a few precious seconds we get the honor of shaking hands with the moon.

“One, two, three, dropping!” Andreas voice gets a bit distorted in the walkie-talkie. It feels as if we are in the middle of a Star Wars movie when three balls of light (aka headlamps) hurtle down through the woods. Heavy powder is thrown around like confetti, smooth turns leave deep tracks in the snow and just when we thought everything was over a boom from a tree crash can be heard. Out of the dark comes he who has a tripod for poles and no permission to use a headlamp. A dazed Norrøna ambassador and cinematographer, Nikolai Schirmer, calms us down “Its alright, the only thing hurt is my pride”. And so, we return our cold feet to the pinewood covered living room after a successful day in the valley that kept all its promises of epic freeride conditions.

“30 minutes to takeoff” photographer Holter shouts. A hint of military strategy is not bad when making snow lovers leave a snowy place. Schirmer and Tritscher are still out doing some last shots while Hargin is multitasking packing and doing yoga somehow at the same time. Sandbech has a variation of different photo equipment in his hands and a piece of the snack of choice in northern Norway; Stockfish in his mouth. The smell of the Stockfish (salted and dried trout) creates different reactions in the gang. Luckily Wiig has taken upon himself to learn the local lingo that mainly consists of swear words. Then – just after we all proudly shouted “ballkuk” (directly translated to balls dick) out to the open valley, the sun appeared. Marking the long-awaited return of sunlight for the very first time in Tamok valley this year. Warmth rushes through our body while we take our place in the car because in this moment we all know it will not be long until we meet again.