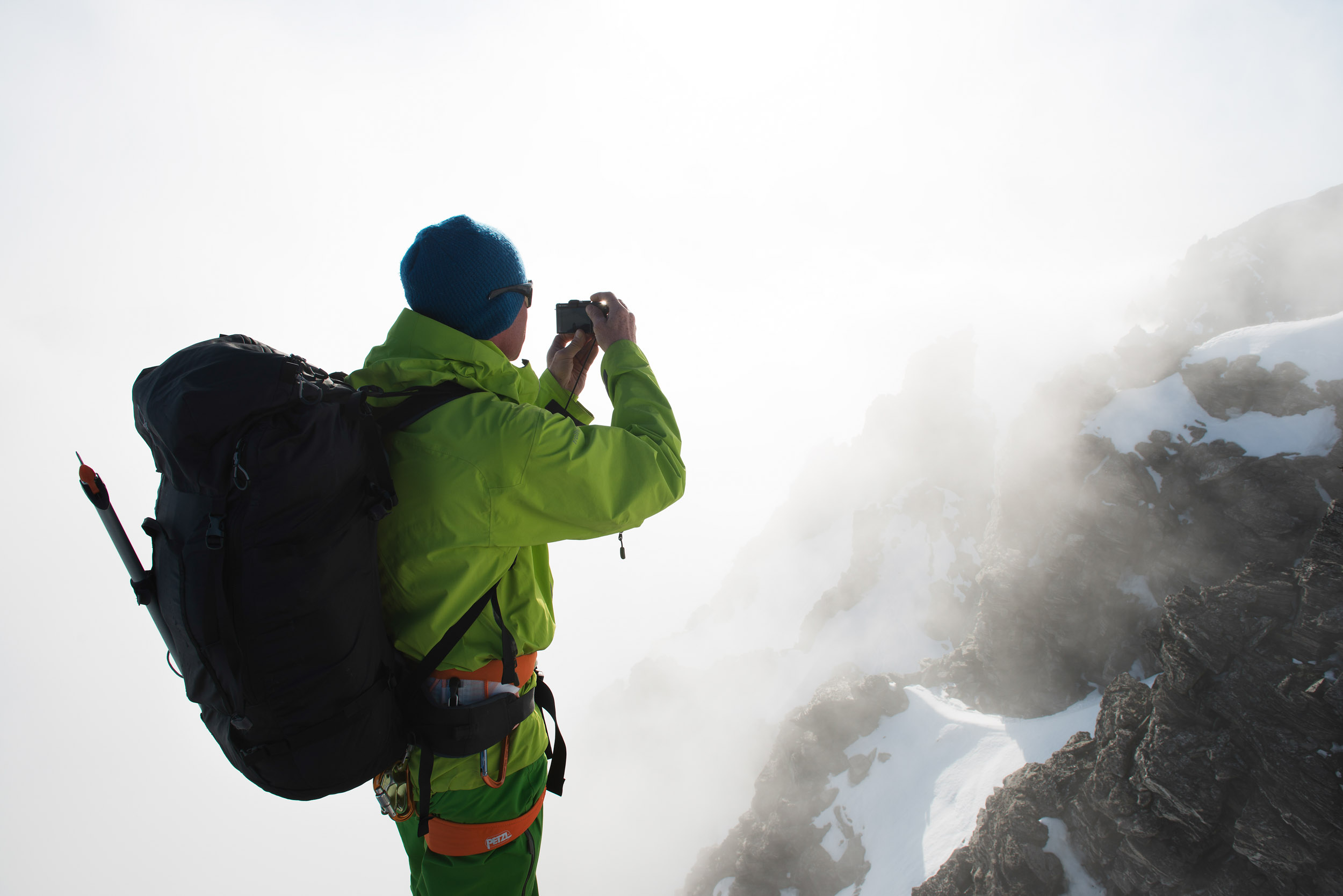 The test of manhood

So you're a mountain climber?

The Troll Wall used to be the test of manhood. It was the question we all got asked when people found out there was a ‘mountain climber’ at the dinner party.

People like that are asking for it, in my opinion. So have you climbed the Troll Wall?” And then you really had to be able to say yes, unless you had a way of sneaking away from the party. Or you could do both: mumble a “yes”, cringe a bit and then sidle out of the back door.

The first ascent of the Trolltinden peaks from Romsdalen had been completed back in 1931, with local man Arne Randers Heen the initiator. The Fiva route slants up through the wall beneath the Nordre and Store Trolltind peaks, and provides a spectacular insight into the Troll Wall itself. But with a climbing grade of 3, the Troll Wall was hardly going to be their next challenge.

Instead, the next milestone was achieved in 1958, when Heen (at the tender age of 53) and the youngster Ralph Hoibakk conquered Trollryggen, the formidable pillar to the left of the Troll Wall. The route has gained a reputation as ‘the longest climbing route in Europe’, with 78 pitches over 3,200 meters of climbing. But it was still a quantum leap from Trollryggen to the Troll Wall. Even in 1958, no one was talking about the chances of overcoming the Troll Wall.

"So you're a mountain climber? Really? Isn't that dangerous? I'm so scared of heights, I could never do it. I read about some guy who climbed using only his fingers. He fell, didn't he?" 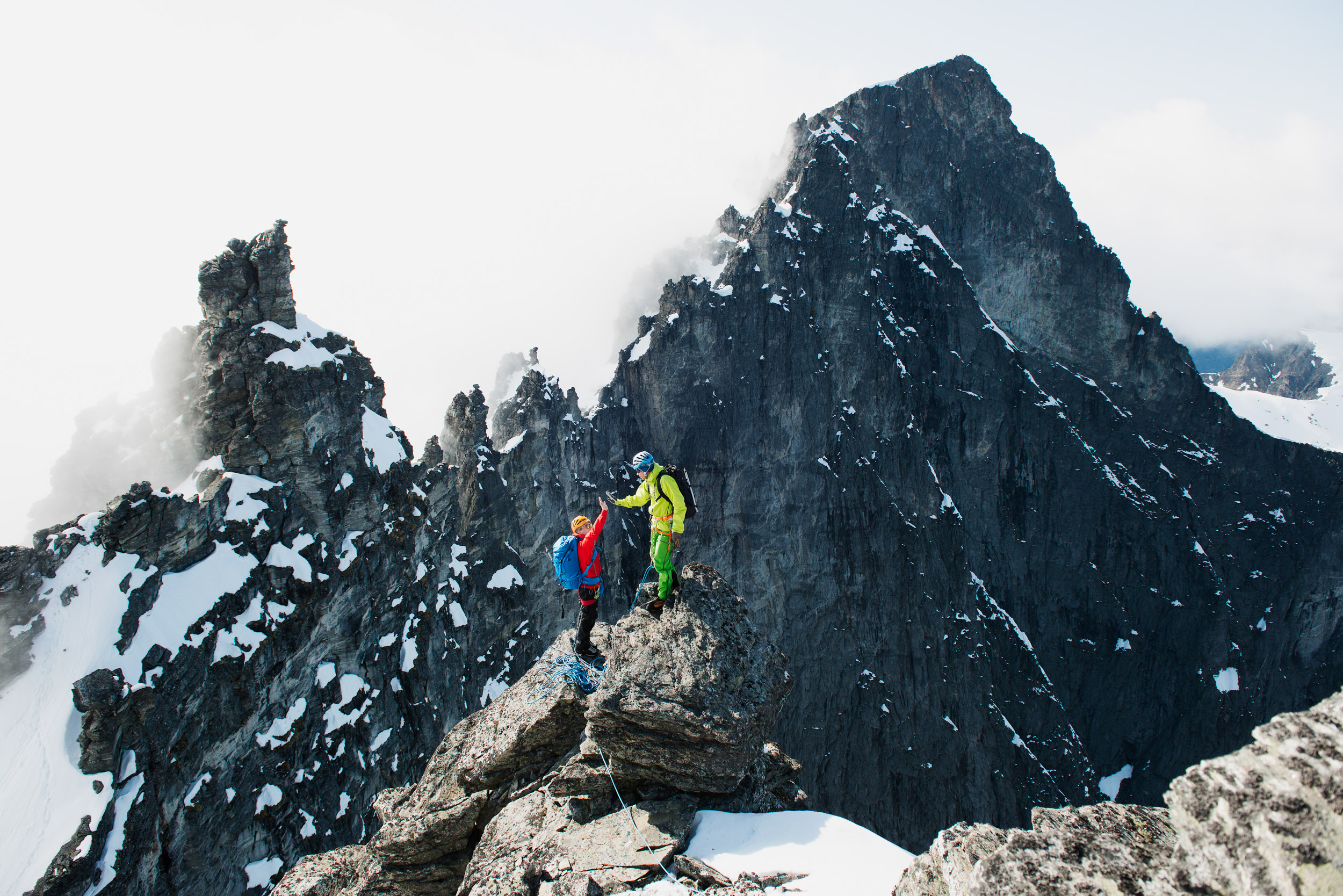 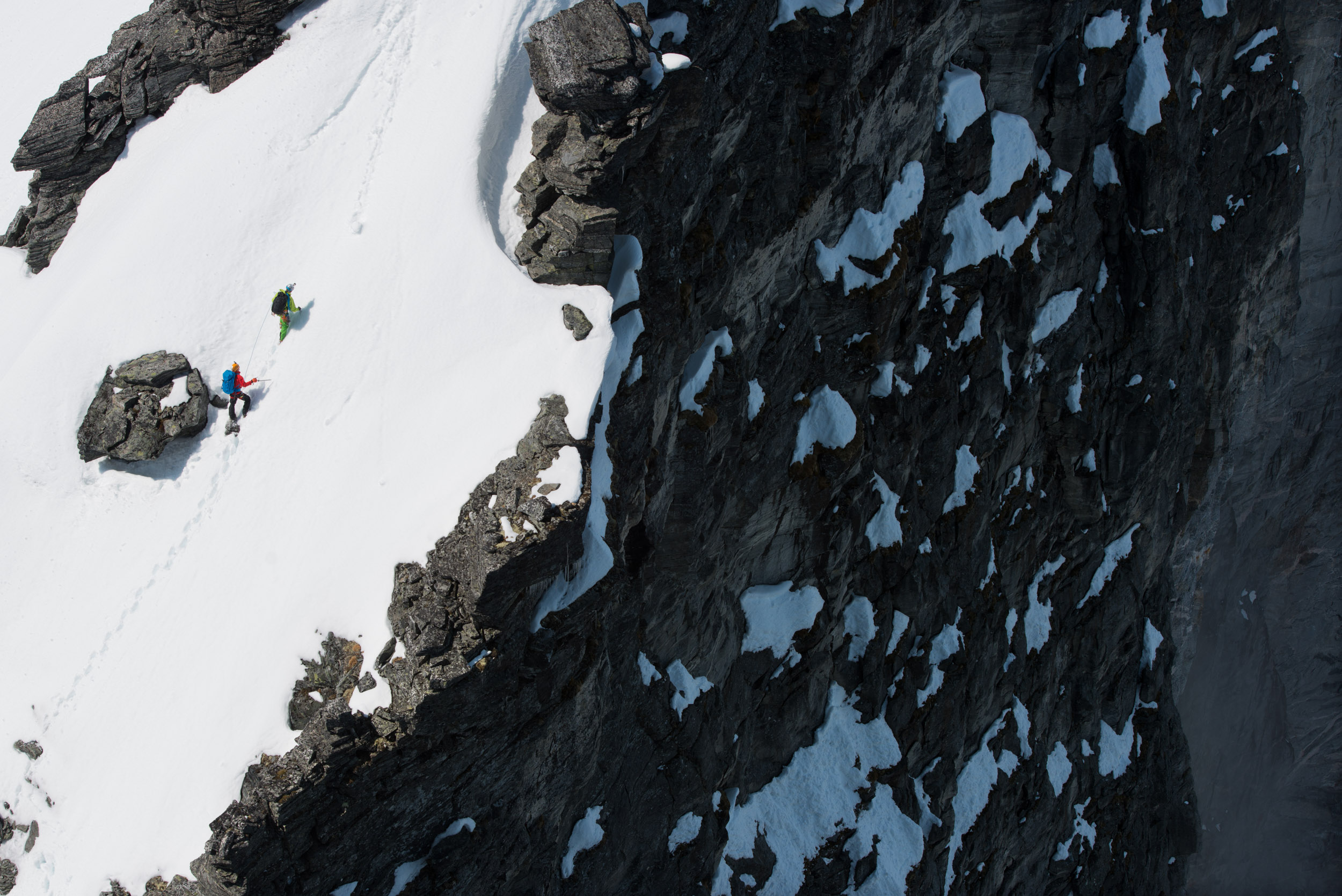 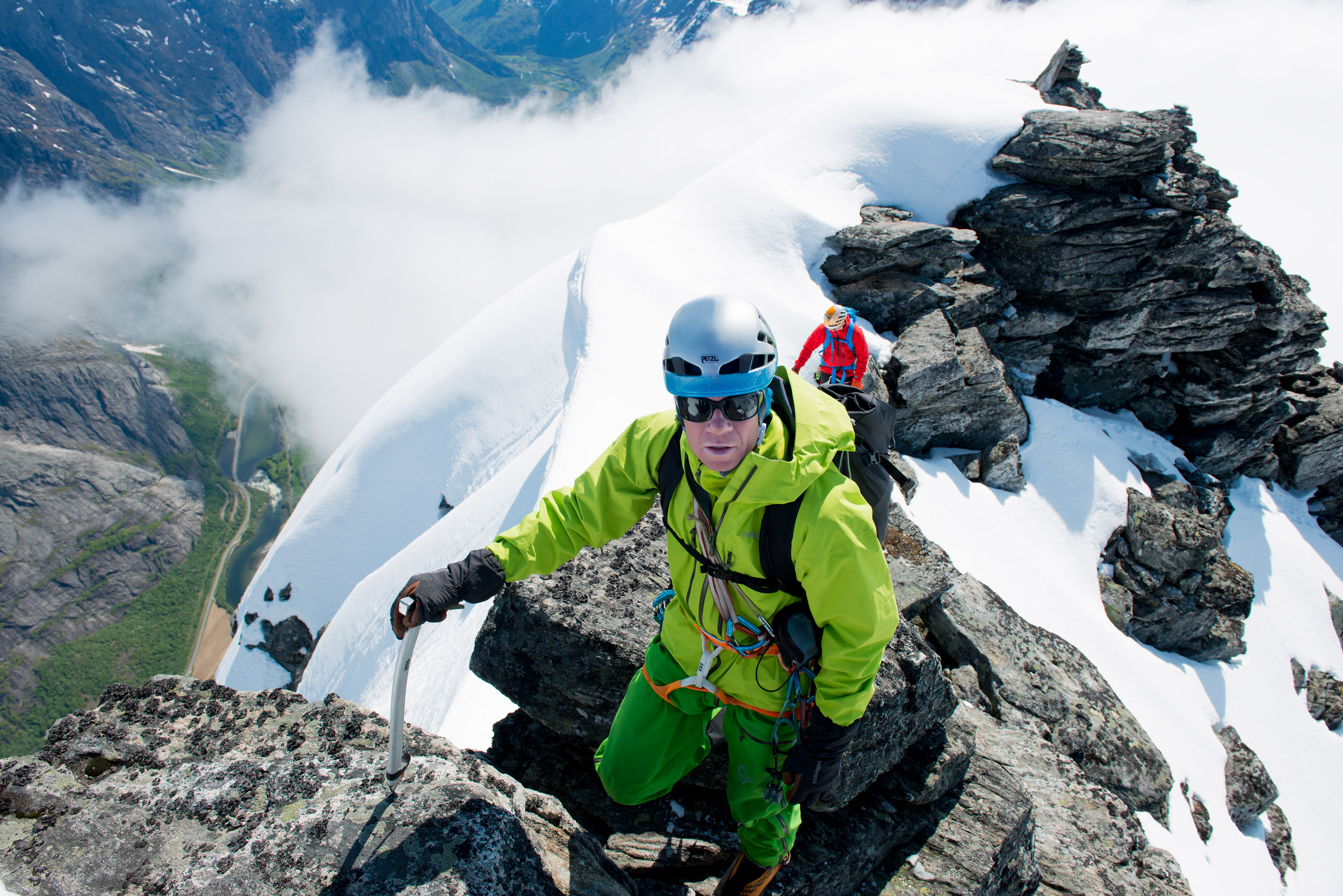 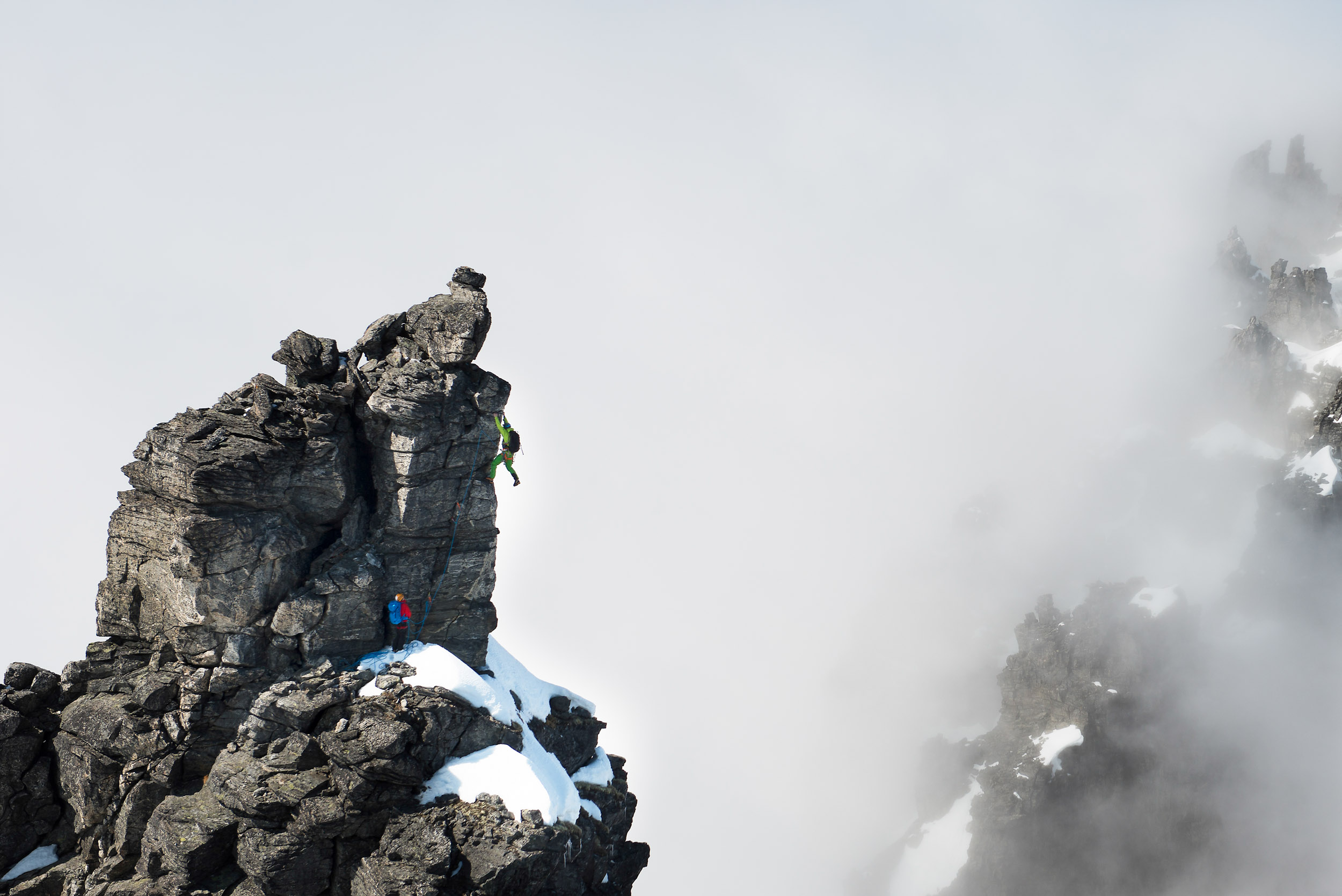 Then, in the spring of 1964, four young Norwegian climbers pioneered a new route up the west wall of Romdalshornet mountain. From here, they could look straight across at the Troll Wall on the other side of Romsdalen. There was still a lot of snow on the mountain, including the ledges of the Troll Wall, and it was then that they realized that the thousand-meter-high wall was not quite as smooth and vertical as they had all thought. So they decided to come back the following year…

What the Norwegians did not know was that several English climbers had already been looking at the Troll Wall. Admittedly, until then they had considered it unclimbable, but some plans were starting to crystallize. In the winter of 1964, British climber Tony Howard was in Romsdalen to reconnoiter the wall. He could see two possible routes. In the summer of the following year, the English and Norwegian climbing teams both approached the wall, from completely different angles. Both had ambitions to make the first ascent of the Troll Wall. Neither suspected what the others were doing.

The newspapers went crazy, calling it the “deadly race up the mountain wall”. “Norwegians getting ahead” one day. “Englishmen leading” on the next. The climbers themselves did not regard it as a competition, but stayed friends the whole time. They ended up pioneering the ‘Norwegian Route’ and the ‘English Route’, or ‘Rimmon Route’, named after the Rimmon Climbing Club of which the Englishman were members. 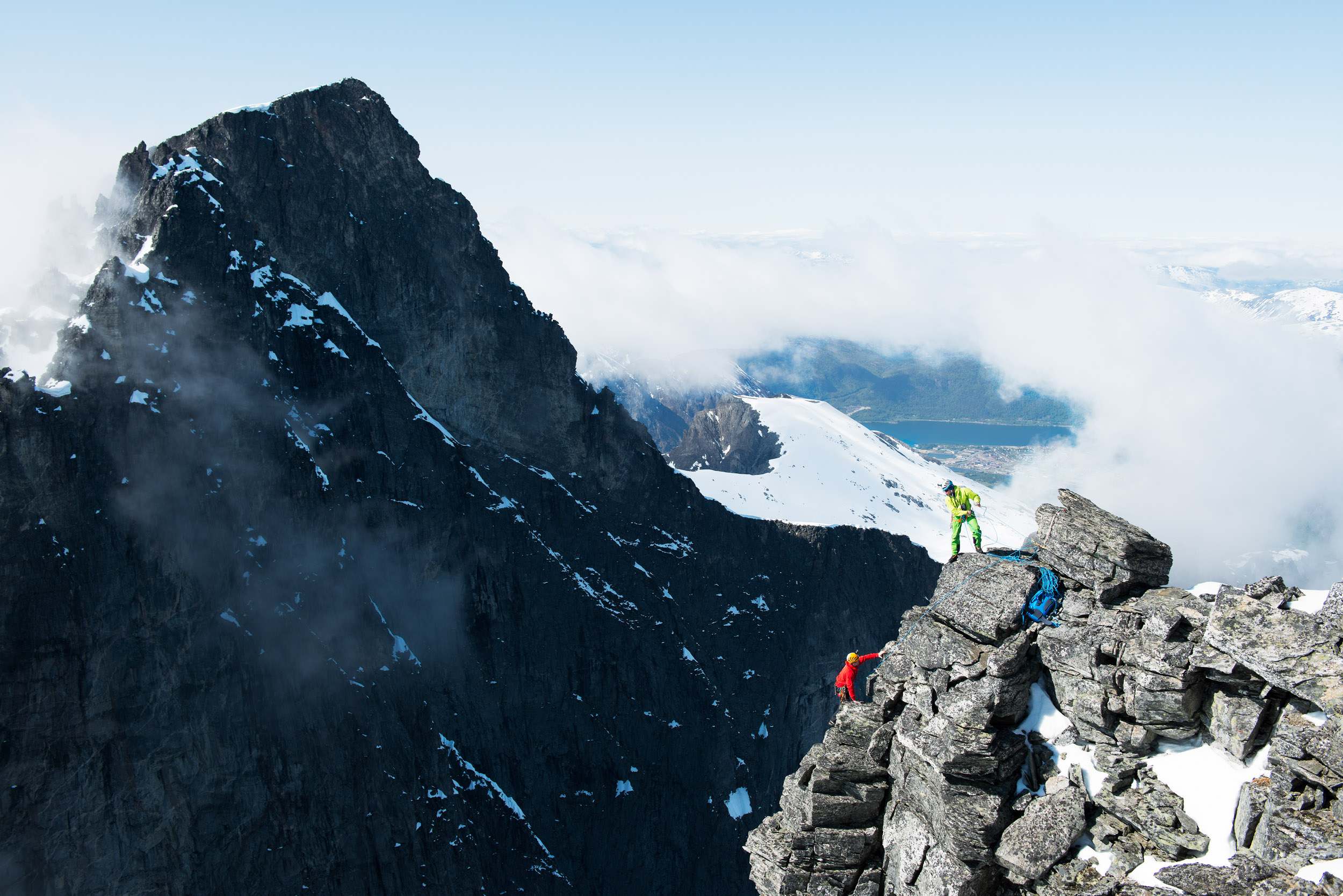 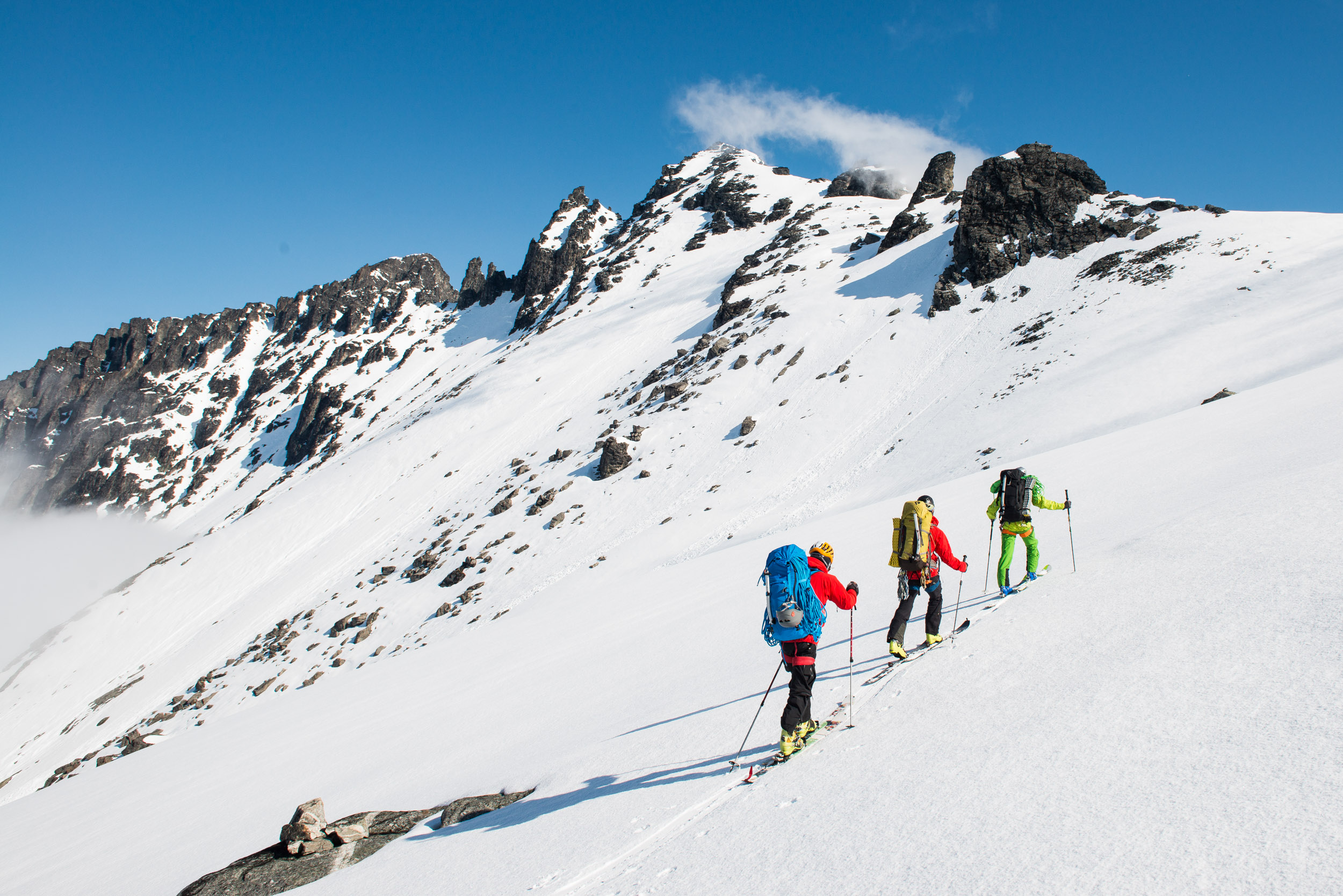 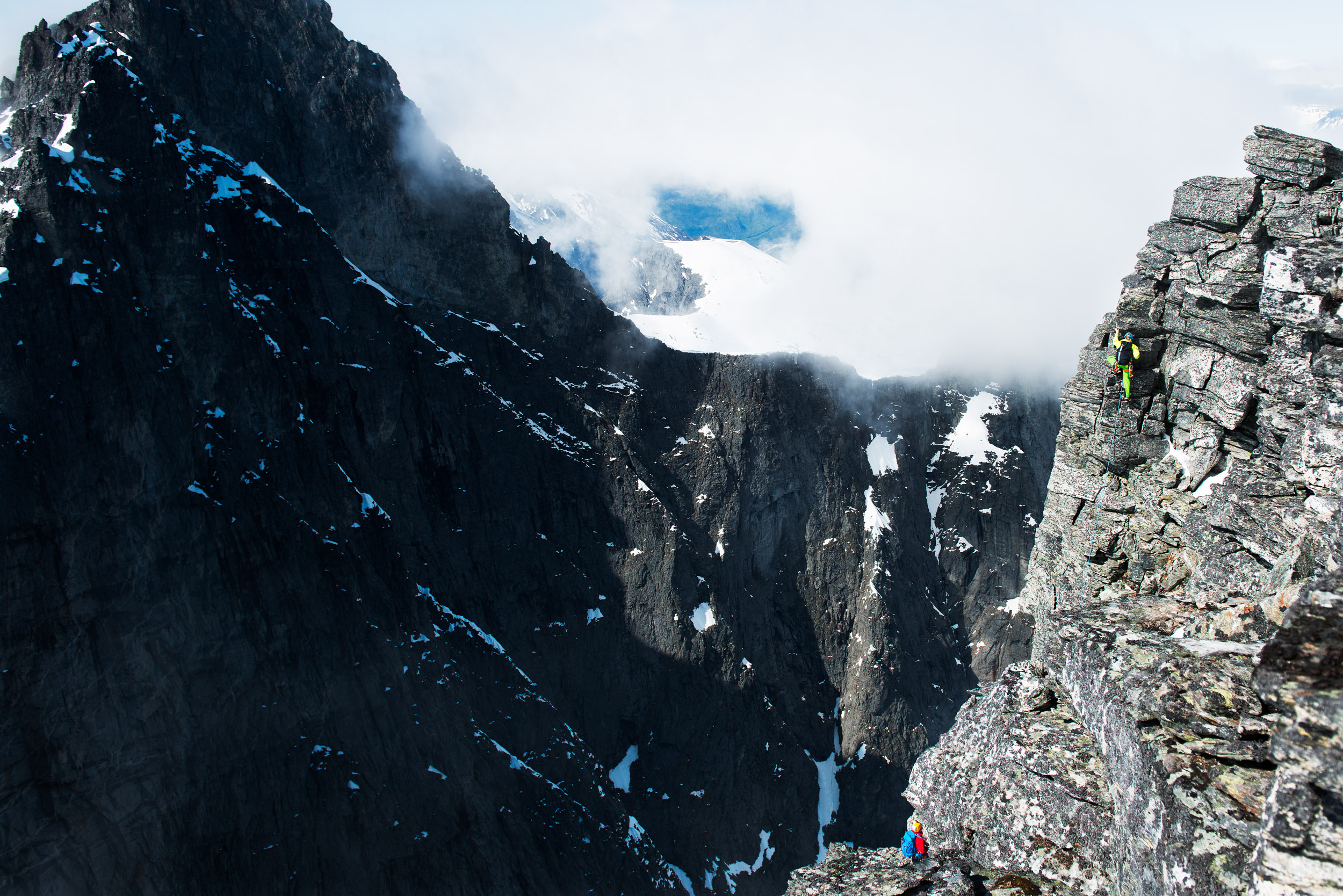 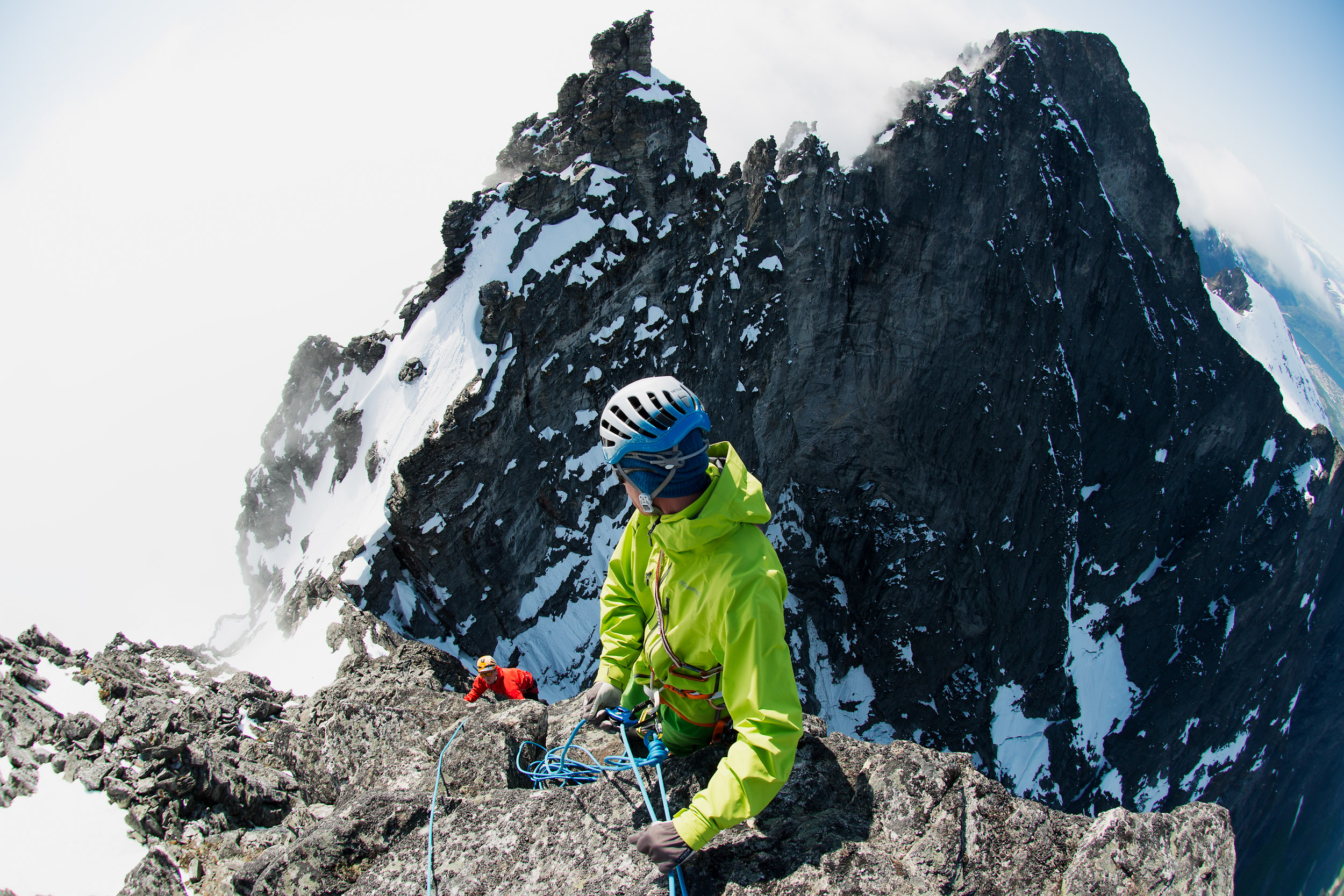 You always wonder whether it is the mental or the physical challenge that is hardest for climbers at that level. When the barriers have been broken on a mountain wall, is it because someone with stronger fingers or a stronger head has come along? What happened on the Troll Wall over the following ten years was partly because a mental barrier had been broken, and partly because modern bolts opened up new opportunities.

Only two years later, in 1967, a French team established a direct route up the highest part of the wall, and in 1972 the English Drummond brothers ascended the ‘Arch Wall’. That was considered to be the most difficult big wall route anywhere in the world, and even now has only been repeated four times. So in just a few years, the Troll Wall went from being “unclimbable” to an entry on the CVs of experienced climbers from all over the world.

The Rimmon Route quickly achieved recognition as the ‘classic route’ up the Troll Wall. It was frequently used throughout the 1970s. But nothing much new happened on the Troll Wall until we got to the 1980s. The exception was a pair of Polish ‘winter besiegers’. The ‘Swedish Route’ was established in 1978, and fast became the new classic route, albeit tougher than Rimmon. Over the next few years, the Åndalsnes boy Hans Christian Doseth came along and pushed Troll Wall climbing to new heights. He started by making the first free ascent of the wall in 1979, and then some more free ascents and Alpine-style winter ascents. Øyvind Vadla and Aslak Aastorp also made their contribution, helping to ensure that the 1980s were the Golden Age of Norwegian big wall climbing.

Eventually, as soon as there was a favorable weather forecast, you would see more than one rope team on the Troll Wall. That lasted until the summer of 1998. Then there was a dramatic rock fall on the wall, which destroyed large sections of the most popular routes. Several more rock falls over the next few years brought all activity on the Troll Wall to almost a complete standstill. The Norwegian Route, on the left-hand side of the wall, escaped the rock fall, and in recent years has become the new classic route. 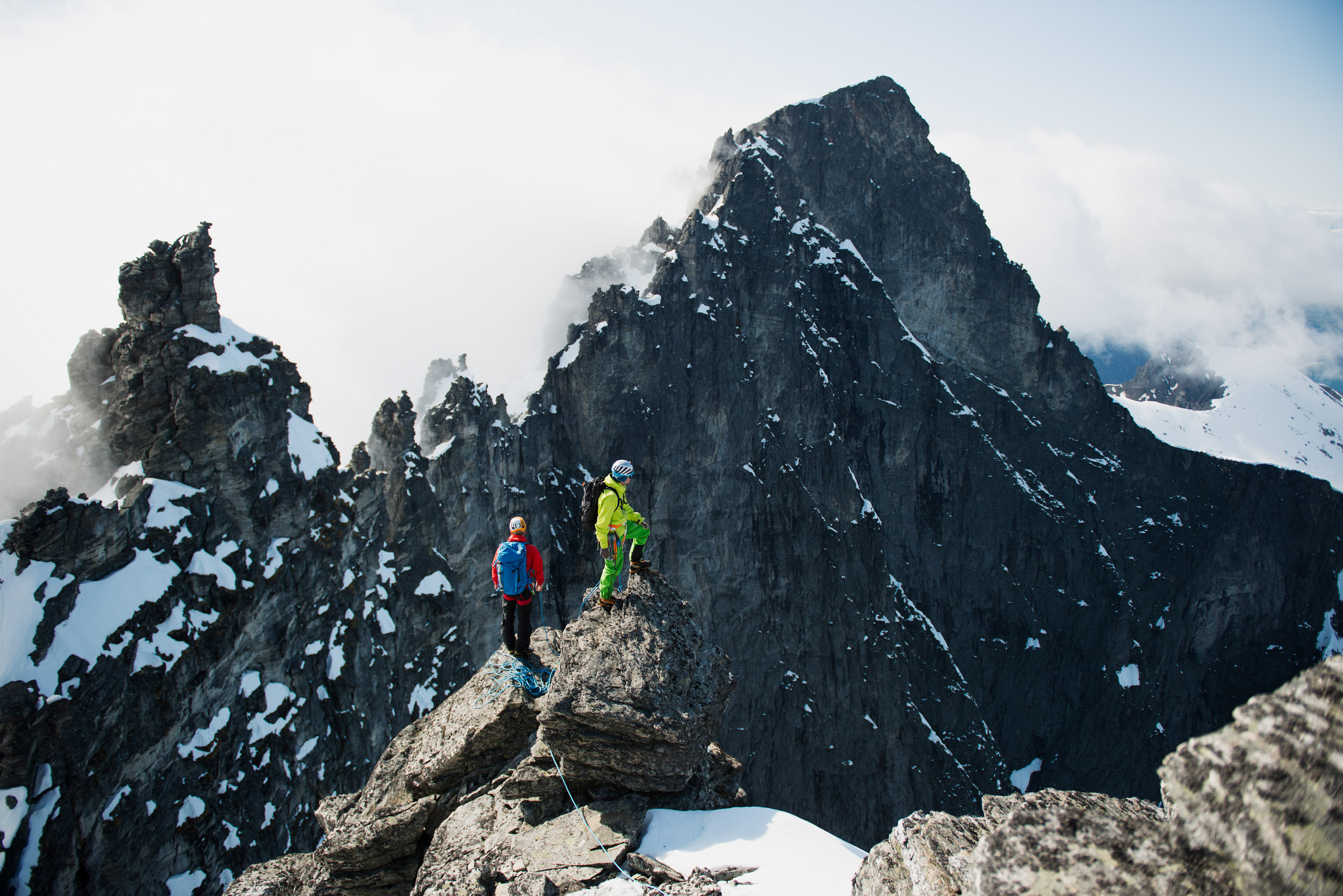 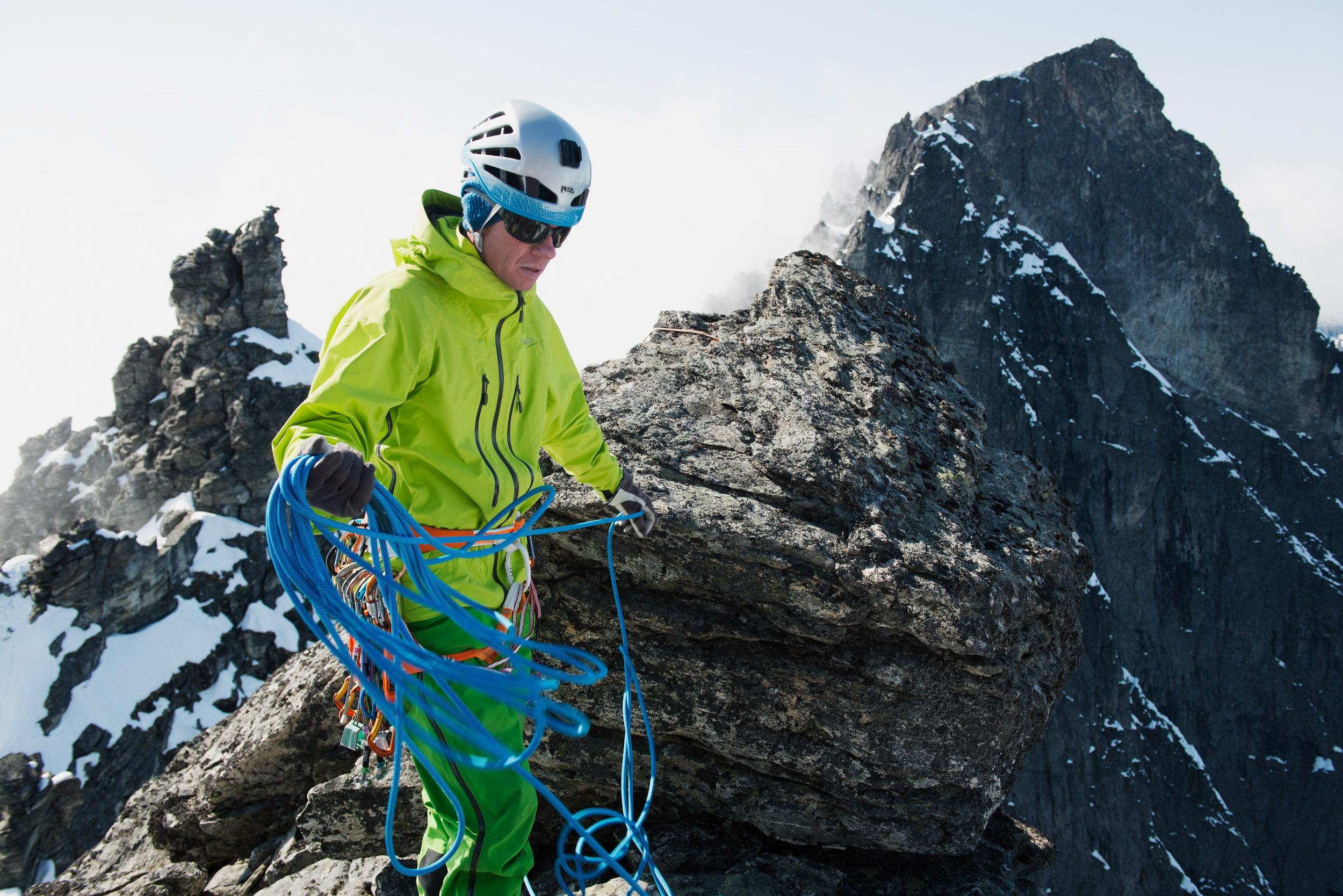 But everything came to a halt after 1998. Apart from a few Eastern European winter ascents, there has been only one exception. The last decade has been what you could call the ‘Sæther period’. During this time, the father-and-son combination (Ole Johan and Sindre Sæther) from Isfjorden have free climbed more or less everything on the Troll Wall. They have ticked off one route after another in a style that overshadows everything else that has been done on the Troll Wall. But after eight or ten Troll Wall ascents, they insist that they have hardly done anything new, just free climbed all the pitches that were left on the existing routes. Right…

It’s true that there are quite a few people who can lead on a Grade 7 climb. But most of them fall off, so to speak, when it goes up to 8. And when it’s Grade 8, overhanging, wet and loose on the 24th pitch of the Troll Wall, right now the only people who can keep going are the Sæther duo.

It’s not easy to see what the next stage on the Troll Wall will be. A solo winter ascent, maybe. But one thing is certain, more than 50 years after the first ascent: The Troll Wall is still the test piece, or test of manhood as it used to be called.

1 thought on “The test of manhood”

This is the Story of Hedvig’s Jacket